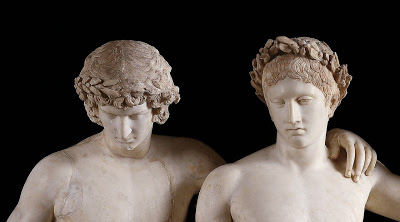 TODAY the Sun enters the Sign of Gemini — the sign of the Twins Castor and Pollux, Gods of Homosexuality.  This is the zodiac sign which ushers in a special sacred time in the Religion of Antinous, for this is the time of year when the STAR OF ANTINOUS rises, after having been hidden below the horizon since the Death of Antinous at the end of October.

We honor the Dioscuri who were born as triplets with the beautiful Helen as their sister. The mother of the three was Leda who was seduced by Zeus who came to her in the form of a swan. Leda gave birth to an egg from which emerged Castor, Pollux and Helen.

The photo above shows the Prado's Ildefonso Group, twin statue of Castor and Pollux, with a marble head of Antinous "restored" to the left figure.

The identical brothers were inseparable, and had a deep affection for one another, for which reason they were often worshipped as gods of homosexuality. Helen was constantly being abducted and in  need of rescue, which the brothers were usually successful in accomplishing, however, her beauty was eventually to lead to the Trojan War. 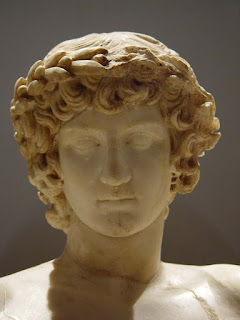 Castor was a skilled horseman, and Pollux was an unconquerable boxer. They took part in the voyage of the Argonauts, and with Orpheus they calmed a storm, for which reason they were worshipped as the protectors of sailors.

Later in the voyage, Castor was killed. Pollux was so overwhelmed that he begged Zeus to accept his life in exchange for his brother's. 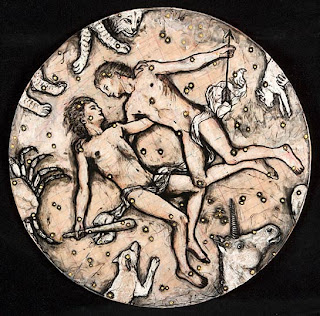 Together they were placed in the sky as the sign of Gemini.

The Divine Twins miraculously appeared in Rome to announce the victory of the Republic over the allies of the last king by watering their horses in the Fountain of Juturna in the Forum.

"The symbolism of brotherly love, and of sacrificing one's life for the immortality of a brother is at the heart of the Religion of Antinous, and is an example of the sacrifice that Antinous is said to have committed for the prolongation of the life of Hadrian. The Dioscuri are Antinous and his "rival" Aelius Caesar, and they are also seen in the two brothers of Hadrian's court, Macedo and Statianus Caesernius, who were servants, protectors, confidants, lovers, friends, witnesses and first priests of Antinous.

"The Sacred Star of Antinous rises during the sign of the brothers Castor and Pollux."