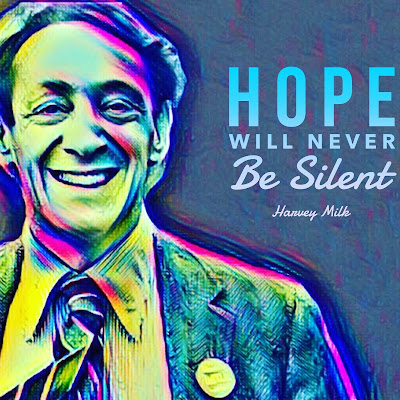 Champion of the early gay rights movement, in 1977 Harvey Milk became the first openly Gay person to be elected to the Board of Supervisors in San Francisco.

He advocated the liberation of homosexuality for the benefit of society in general, and jokingly claimed to be a gay recruiter. He was instrumental in passing the Gay Civil Rights Bill in San Francisco, which was to be his undoing.

On November 27, of 1978, Milk was murdered City Hall along with Mayor George Moscone by former City Supervisor Danny White who had resigned his office after the enactment of the bill. Dan White was acquitted of murder but sentenced to only seven years on manslaughter charges.

Following his acquittal on May 21st, 1979, riots broke during a demonstration in front of City Hall, and later, 100,000 people marched on Washington in support of Gay Rights chanting "Harvey Milk Lives!" He became the first gay saint and martyr following the movement that began at the Stonewall.

In a tape recording made one year before his assassination, as if in prophecy, Harvey Milk said, "If a bullet should enter my brain, let that bullet destroy every closet door."

For his actions, for his life, for the changes that he effected, and for the love that continues to burn for him in the memory of his gay, lesbian and transgender children, we priests of Antinous recognize and sanctify Harvey Milk as a Heroic Saint and Martyr.