AS THE BEES MYSTERIOUSLY DISAPPEAR
WE REMEMBER ANTINOUS-ARISTAEUS

AS we celebrate World Bee Day on May 20th, we mourn the fact that a mysterious malady is wiping out as many as half of the beehives needed to pollinate much of produce in North America and many other parts of the world.

This is a crisis of mythic proportions ... in the truest sense of the word. In Classical Mythology the world's bees all vanished ... and it took the daring plunge of a brave Hero to find the divine powers to bring the bees back ... and to save mankind.

It is all there in Virgil's version of the story of Aristaeus (Aristée/Aristaios).

As this statue in the Louvre shows, Antinous was identified by the Ancients with Aristaeus ... they both descended into a river and emerged with godly powers.

Aristaeus was the son of Apollo and the river-nymph Cyrene and his assignment on the earthly plane was to teach mortal humans the art of farming and cultivating crops and tending livestock and keeping bees.

Honey was practically a form of ambrosia, or at least the nearest thing to ambrosia that mortal men had. It was the job of Aristaios to teach men how to cunningly harvest honey without being stung.

But Aristaeus had inadvertently caused the death of Eurydice by causing her to tread upon a venomous serpent. Her death and Orpheus's attempt to bring her back to the earthly plane were the origins of the Orphic Mysteries.

Shortly after Eurydice died, the bees which Aristaeus had been nurturing all began dying of a unexplainable cause. Nothing he could do seemed to prevent them from dying and soon they were all gone and humans were deprived of honey, beeswax, mead and the many other products which bees provide to man, not to mention the fact that, without bees, there was nobody to pollinate plants. The situation was dire.

"Aristæus, who first taught the management of bees, was the son of the water-nymph Cyrene. His bees had perished, and he resorted for aid to his mother. He stood at the river side and thus addressed her: 'O mother, the pride of my life is taken from me! I have lost my precious bees. My care and skill have availed me nothing, and you my mother have not warded off from me the blow of misfortune.'

"His mother heard these complaints as she sat in her palace at the bottom of the river, with her attendant nymphs around her. They were engaged in female occupations, spinning and weaving, while one told stories to amuse the rest. The sad voice of Aristæus interrupting their occupation, one of them put her head above the water and seeing him, returned and gave information to his mother, who ordered that he should be brought into her presence.

"The river at her command opened itself and let him pass in, while it stood curled like a mountain on either side. He descended to the region where the fountains of the great rivers lie; he saw the enormous receptacles of waters and was almost deafened with the roar, while he surveyed them hurrying off in various directions to water the face of the earth.

"Arriving at his mother’s apartment, he was hospitably received by Cyrene and her nymphs, who spread their table with the richest dainties. They first poured out libations to Neptune, then regaled themselves with the feast, and after that Cyrene thus addressed him: 'There is an old prophet named Proteus, who dwells in the sea and is a favorite of Neptune, whose herd of sea-calves he pastures. We nymphs hold him in great respect, for he is a learned sage and knows all things, past, present, and to come. He can tell you, my son, the cause of the mortality among your bees, and how you may remedy it.'"

The story goes on to say a river nymph escorted Aristaeus to the cave of Proteus where he subdued the cantankerous old prophet (who was a shape-shifter and tried unsuccessfully to elude Aristaeus by changing form). Aristaeus told him of his plight and wanted to know the cause of this misfortune and how to remedy it. Bulfinch writes:

"At these words the prophet, fixing on him his gray eyes with a piercing look, thus spoke: 'You receive the merited reward of your deeds, by which Eurydice met her death, for in flying from you she trod upon a serpent, of whose bite she died. To avenge her death, the nymphs, her companions, have sent this destruction to your bees. You have to appease their anger, and thus it must be done: Select four bulls, of perfect form and size, and four cows of equal beauty, build four altars to the nymphs, and sacrifice the animals, leaving their carcasses in the leafy grove. To Orpheus and Eurydice you shall pay such funeral honors as may allay their resentment. Returning after nine days, you will examine the bodies of the cattle slain and see what will befall.'

"Aristæus faithfully obeyed these directions. He sacrificed the cattle, he left their bodies in the grove, he offered funeral honors to the shades of Orpheus and Eurydice; then returning on the ninth day he examined the bodies of the animals, and, wonderful to relate! a swarm of bees had taken possession of one of the carcasses and were pursuing their labors there as in a hive." 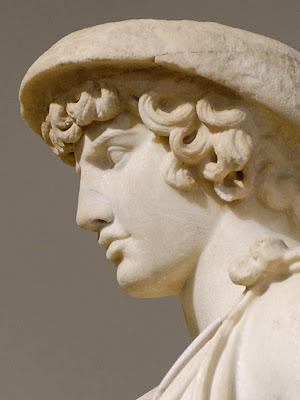 So there we have it! Even the most illiterate and ignorant peasant would know the story of Aristaeus and the bees and the plunge into the river to unravel a Sacred Mystery. Aristaeus survived the plunge and emerged with Secret Knowledge which was of a great service to mankind.

For without bees to pollinate orchards and crops, mankind can scarcely survive ... a fact which has come home to haunt us today as bee populations dwindle worldwide and food riots rage in developing countries.

Ancient peoples, even those who could not read or write, could look at the statue of Antinous-Aristaeus and immediately see the Sacred Symbolism ... Like Aristaios, Antinous is a god who took the plunge into a river and who emerged with knowledge of Sacred Mysteries.

Wearing a sun hat, carrying a farm tool and holding an olive sprig, Antinous-Aristaeus symbolizes the union of sunshine and water (Apollo/Cyrene) combined with ingenuity and hard work and the ability to dive into the spiritual depths ... defying death ... and to emerge with a miracle which benefits all humankind.