FRAGMENT OF A STATUE
STOLEN FROM HADRIAN'S WALL MUSEUM 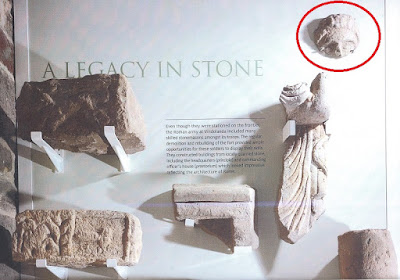 A sneak thief carried out a fragment of a statue of a young Roman male under his or her coat from a museum at Hadrian's Wall, police in northern England say.

The theft happened some time during opening hours Thursday or Friday at the VINDOLANDA Trust on Hadrian’s Wall. 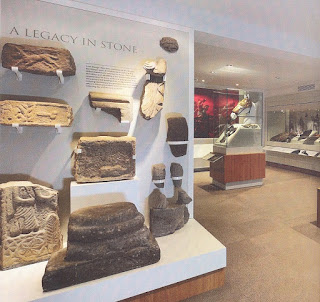 The statue was on display in a number of pieces and the stolen piece (circled in red in the photo above) showed a forehead, hair line, eyes and part of a nose of a young male.

Apparently, the thief climbed up onto the exhibit dais and pried the piece off the wall. Other parts of the statue must have been too big to be taken unnoticed.

Enquiries are on-going into the theft and officers are keen for anyone with information to come forward.

Anyone who has visited the museum between Thursday morning and Saturday morning and saw anything that seemed out of the ordinary or suspicious is urged to contact police.

Posted by Hernestus at 4:43 PM