THERE'S BEEN A NEW SIGHTING
OF THE GHOST OF THE PANTHEON

FOR centuries visitors to Hadrian's Pantheon have claimed to have seen a ghost ... a shadowy figure who moves about the edifice totally oblivious to mortal visitors.

The latest sighting was tweeted by @pantheon_roma on Twitter this past week.

The panoramic photo shows a shadowy black figure on the left side ... much larger than all the mortal humans in the photo. 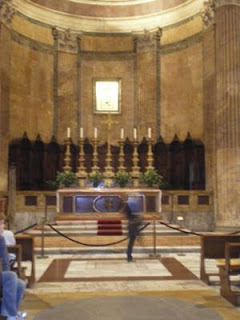 In recent years, thanks to phone cameras, tourists increasingly have seen ghostly figures ... often standing alone where nobody else is nearby or else striding through the vast room when no one else was present in the Pantheon.

Very often, the apparition floats around the domed space or peers out from shadows behind columns.

For generations, people have claimed the Pantheon is haunted by the ghost of Italy's former king Vittorio Emanuele II.

His tomb is inside the Pantheon and visitors report seeing a stately gentleman in royal raiment with a distinctive mustache and goatee identical to the king's.

But others have claimed the figure wears the white robes of an Ancient Roman priest with his toga pulled over his head just as a Patrician would do out of piety in a temple.

Watch this video and notice the white-robed figure which hovers far above the crowds at 0:16 seconds and again at 0:24 seconds: