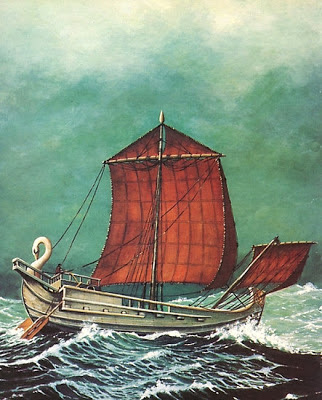 A remarkably well-preserved ancient Roman ship has been discovered on the seabed off the coast of Sardinia.

The 2,000-year-old wreck was found at a depth of 150ft by a specialised diving unit of the Italian police, working with archaeologists, in the strait that separates Sardinia from Corsica.

The ship was carrying a load of terracotta tiles, which are also in a good state of preservation.

The roof tiles, believed to have been produced in or around Rome, were packed into the hold of the vessel, which is 60ft long and 23ft wide. 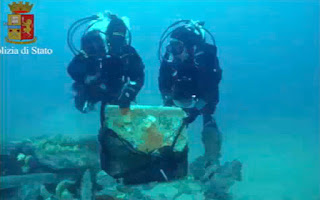 The photo at right shows divers recovering one of the large roof tiles.

They were probably going to be used in the construction of a villa for a senior Roman official or wealthy merchant, experts said.

“Given the location of the discovery, archaeologists believe that the vessel was destined for Spain or the west coast of Sardinia,” an official statement said, adding that the find was of “great scientific value”.

The ship’s cargo was intact and “packed just as it was at the moment of departure”, the statement by the Sardinian authorities said. 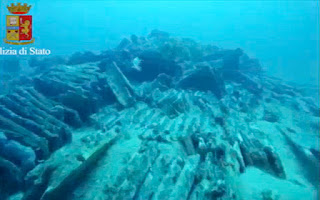 The weight of the load may have contributed to the ship capsizing.

“The cargo is very well preserved and has enormous value to scholars. We’re really pleased about this discovery.”

The exact position of the wreck is being kept secret because of the threat of underwater looting.