SAINT PLATO AND THE DIVINE TWINS

THE SUN has entered the Sign of Gemini — the Twins Castor and Pollux, Gods of Homosexuality.

This is the zodiac sign which ushers in a special sacred time in the Religion of Antinous, for this is the time of year when the STAR OF ANTINOUS rises, after having been hidden below the horizon since the Death of Antinous at the end of October.

On May 21st the Religion of Antinous honors the Divine Twins, Castor and Pollux. On this date we also honor our Saint Plato, because May 21st is Plato's birthday, and no worshipper of Antinous could possibly forget HIS birthday.

The greatest of all western mystics and philosophers was born on this day in the year 427 BC. He was originally named Aristocles, but was called Plato by one of his teachers because of the breadth of his shoulders and of his speech, and we might also say because of the magnitude of his legacy of wisdom.

He was a follower of Socrates and the majority of his works are written as Dialogues of Socrates, wherein Plato elaborates his vision of the Universe, the inner workings of mankind, the complexities of human relationships, and the virtues of civilization.

All we know about Socrates is in reality only what Plato has told us of his teacher. Out of loyalty, Plato gave all personal credit to the wisdom of his divine teacher. Plato founded the Academy in Athens that was dedicated to the love of wisdom and to the perfection of the minds and souls of young men. Plato studied Pythagoreanism in Italy and made further speculation into the mathematical mysticism of the first philosopher thereby creating the model upon which western monotheism is based. The Platonic system was essentially a unification of the social inquiry of Socrates with the cosmic ramifications of the teachings of Pythagoras.

Here is how Flamen Antinoalis Antonyus Subia explain's the significance of Saint Plato:

"In the vision of Love that Plato expounded, Venus Urania, Celestial Love, is glorified as highest form of human affection, above the earthly requirements of procreation. The love between two men, what is innocently called Platonic Love, was considered by Plato to be the most divine form of relationship. Hadrian, in all ways the most Platonic of all Emperors, the veritable manifestation of the Philosopher King as glorified by Plato in The Republic, was demonstrating the meaning of Venus Urania, for all the world to see, in his passion for Antinous. For the beautiful light in which Plato illuminated the inner nature of homosexual love, he is venerated as a divine Saint of the Religion of Antinous."

But May 21st is also when we honor Castor and Pollux, the Dioscuri who were born as triplets with the beautiful Helen as their sister. The mother of the three was Leda who was seduced by Zeus who came to her in the form of a swan. Leda gave birth to an egg from which emerged Castor, Pollux and Helen.


The identical brothers were inseparable, and had a deep affection for one another, for which reason they were often worshipped as gods of homosexuality. Helen was constantly being abducted and in need of rescue, which the brothers were usually successful in accomplishing, however, her beauty was eventually to lead to the Trojan War.

Castor was a skilled horseman, and Pollux was an unconquerable boxer. They took part in the voyage of the Argonauts, and together with Orpheus were able to calm a storm at sea, for which reason they were worshipped as the protectors of sailors.

Later in the voyage, Castor was killed, and Pollux was so overwhelmed that he begged Zeus to accept his life in exchange for his brother's. Out of compassion, Zeus immortalized Castor and proclaimed that Pollux would spend half the year in the underworld and half the year in heaven with his brother. Together they were placed in the sky as the sign of Gemini.

The Divine Twins miraculously appeared in Rome to announce the victory of the Republic over the allies of the last king by watering their horses in the Fountain of Juturna in the Forum.

Flamen Antonyus has this further insight into Castor and Pollux: 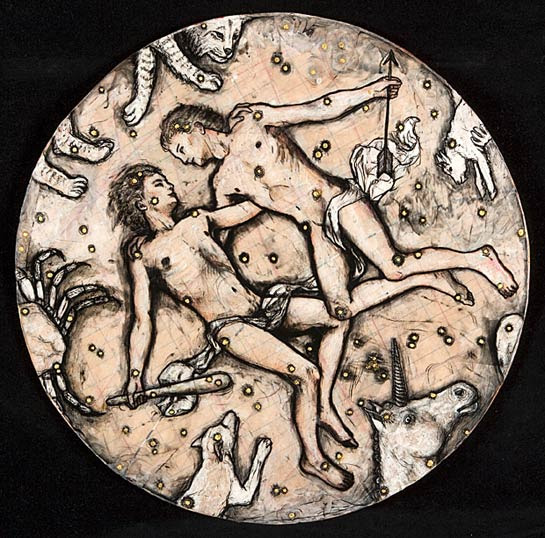 "The sacredness of the Twin Gods, with their third twin sister Helen is found in Norse Mythology as the Alcis and as the twins Frey and Skirnir with their third twin sister Freya.
"The symbolism of brotherly love, and of sacrificing one's life for the immortality of a brother is at the heart of the Religion of Antinous, and is an example of the sacrifice that Antinous is said to have committed for the prolongation of the life of Hadrian. The Dioscuri are Antinous and his "rival" Aelius Caesar, and they are also seen in the two brothers of Hadrian's court, Macedo and Statianus Caesernius, who were servants, protectors, confidants, lovers, friends, witnesses and first priests of Antinous.
"The Sacred Star of Antinous rises during the sign of the brothers Castor and Pollux."


Thus we pay tribute today to St. Plato, who enunciated the philosophy of same-sex love, and to the inseparable Castor and Pollux whose same-sex love is immortalized amongst the stars.