THE NIGHT NIJINSKY UPSTAGED THE TITANIC

ONLY NIJINSKY could upstage the Titanic.

Exactly 100 years ago, on May 29th, 1912, with the sinking of the great liner still fresh in the public's mind, Vaslav Nijinsky made his debut as a choreographer — with a staging that was as unimaginably shocking as the Titanic tragedy. 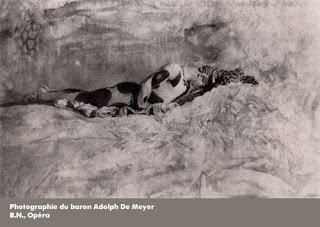 The world would never be the same ...
We consecrate Vaslav Nijinsky as a Saint of Antinous and as a living incarnation of Antinous/Pan/Dionysus. St. Vaslav Nijinsky knew how to live Homotheosis every day of his life — which means living daily the Divine Spirit of Being Gay — and he knew how to express this ineffable spirit through dance as well.
Posted by Hernestus at 9:00 AM