THE SACRED HOUNDS OF ANTINOUS
AND HERMANUBIS

WORSHIPERS of Antinous tend to be animal lovers. Perhaps it is because Antinous and Hadrian both are known to have loved animals. Hadrian even erected a tomb to his favorite horse. Horses, dogs, cats, pet birds — many members of ECCLESIA ANTINOI have beloved animal companions, or have had at various times in our lives.

Dogs are especially popular. Our own Flamen Antinoalis Antonyus Subia, a native of El Paso, has likened himself to a Rio Grande coyote.

On May 22nd, appropriately, the Religion of Antinous honors the faithful dog Maira who was so devoted to her master that she followed him into the heavens as the Constellation Canis Minor.

May 22nd is the Ancient Roman festival of Canis Erigoneius (Feast Day of the Dog of Erigone) which honors the she-dog Maira and her elderly master Icarius and his daughter Erigone.

This doggy feast day is not to be confused with the other Ancient Roman feast day each year when a dog would be crucified as a warning to all watchdogs not to fall asleep on the job. That was what happened once when the Gauls defeated a Roman Legion and marched undeterred on the city of Rome itself. The city's terrified residents fled in all directions. Total evacuation of a major city is impossible.

A few people stayed behind (mostly the infirm, elderly and pregnant mothers-to-be) and sought refuge with a few soldiers and Vestal Virgins atop the Capitoline Hill, where the city's vast treasure was stored in the Temples of Zeus, Juno and Minerva. Food was running low and the Sacred Geese of Hera looked very tempting but the Vestals warned that the goddess would not condone their slaughter. Spare the geese, and you spare Rome! Slaughter the geese, and Rome is lost!

The Gauls were intent on getting their hands on that treasure, so one night the Gauls crept up the slopes of the hill undetected, the hunger-weakened soldiers and watchdogs having dozed off. Only the plump Sacred Geese of Juno raised the alarm and roused the soldiers, who managed to stave off the Gauls and hold out until reserve Legions could arrive to retake the city and drive out the Gauls.

Needless to say, the dozy guards and watchdogs were punished severely — thrown off the Tarpeian Rock to their deaths. And after that, the Romans annually crucified a dog to make sure no watchdog forgot the lesson. Meanwhile the Sacred Geese were pampered to death, dying of arteriosclerosis and avian gout from over-eating. 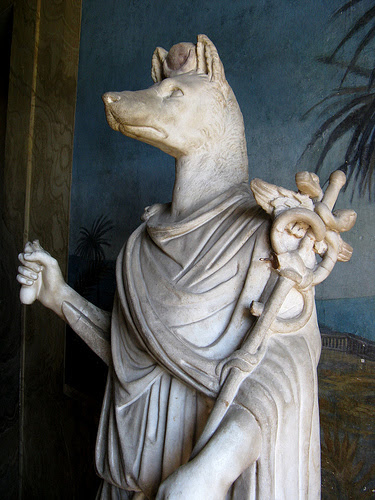 But on the feast day of Canis Erigoneius, the Ancient Romans turned sentimental and pampered their dogs in remembrance of the faithful she-dog whose devotion to her master and mistress triumphed over death itself. Like so many holidays (both ancient and modern), it was a day to get falling-down drunk because the story involved Dionysus and the gift of wine to mankind.

It is the stuff that prime-time premium cable TV miniseries are made of: A kindly old man throws a party for his neighbors, who get completely hammered and end up murdering their host in a drunken frenzy. Afterward, they bury his body in a secret location, making off with his fortune and killing each other for their "fair" shares.

Ah! But the old man's faithful dog finds the secret grave under a tree and digs up his body. His daughter sees the grisly corpse and hangs herself in grief from the tree where the grave is located. The dog sits by both bodies, dutifully protecting them from anyone who approaches so that the dog has to be killed in order for authorities to dispose of the corpses.

With it, Icarius had been able to produce the mother of all wines, which was so potent that the neighbors who tasted it all came down with such severe alcohol poisoning that they became isanely envious of his fortune and desirous of his voluptuous daughter that they murdered Icarius — to get the Gift of the God.


Antinous-Dionysus was so outraged at what happened that he slapped a virulent curse on everyone in the neighboring countryside. He sent a plague of violent illness and delirious madness over the entire region. If they thought they had been poisoned from the divine wine, they REALLY got sick out of their minds this time.

In addition, all the unwed female offspring of the district spontaneously hanged themselves from the nearest tree. This is the origin of the biblical Grapes of Wrath.

Icarius was immortalized as the constellation Bootes, Erigone was placed into Virgo along with Persephone, and the dog Maira was placed in the Canis Minor.

Flamen Antinoalis Antonyus Subia relates the story in detail, concluding with the words, "Antinous, who is the New Dionysus, gives us the power of the dog Maira to find the buried mystery of his wine-giver."

For that is the Mystery Teaching of this myth. Icarius died and was dug up and raised to the heavens. He was "Twice Born" (Dio-Nysus) just as the god Antinous-Dionysus was born twice. As a foetus, Dionysus was taken from his mother's womb at the point of death and was sewn up in the upper groin-thigh of Zeus so that he could grow to full term — and was born a second time by the King of the Gods.

Similarly, Antinous was born of mortal woman but died and was reborn as a god at the proclamation of Hadrian in his capacity as the earthly Zeus. 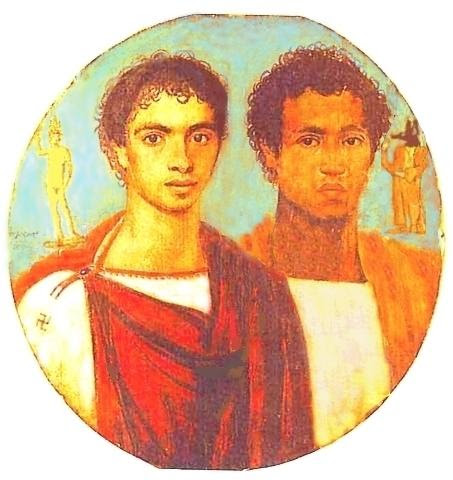 Ah! But that's not all for us dog-lovers!

This is where Hermanubis comes into the story. In the 2nd Century AD the Religion of Antinous was thriving at the same time that the cult of Hermanubis was spreading to Rome. The Romans thought of Hermanubis as a merging of Hermes the messenger god and Anubis the Egyptian god of the dead.

But as so often, the Greeks hadn't translated the glyphs correctly and the Romans had blindly trusted the Greeks. In fact, the name Hermanubis is from the Egyptian Heru-M-Anpu, which means Horus-as-Anubis.

Rightly or wrongly (perhaps with the intercession of Hermes the Trickster), the Greco-Egyptian magician priests of Hermopolis understood that Hermanubis combined the cunning canine qualities of nocturnal scavenging (like a Mexican coyote) to emerge at dawn triumphant — like Horus the Sun God.

Woshippers of Hermanubis underwent initiations in which they discovered the "Anubic Light" which led them out of the darkness of their earthly existence. For a while, the cult of Hermanubis was very popular in Rome and there were great statues of Hermanubis. But a scandal of some sort resulted in the total suppression of the worship of Hermanubis in the city of Rome. No one knows why.

But his worship continued in the provinces, particularly in Egypt, where Anubis was quickly supplanted by Hermanubis — combining Horus and Anubis — Light Emerging from Death.

If you look closely at the Tondo of the Two Lovers, the portrait shows two men who are clearly worshippers of both Antinous and Hermanubis. 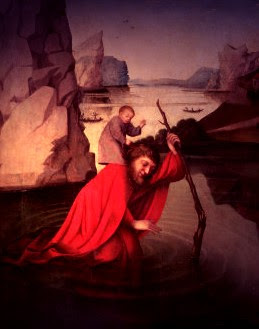 Antinous was worshipped at Antinoopolis on the East bank of the Nile, directly across the river from Hermopolis, where Hermanubis was worshipped on the West bank of the Nile. The two gods were clearly "neighbors" and were closely enough related to each other that they were both considered compatible for helping someone to become "Twice Born" and to triumph over death.

Ironically, Hermanubis is still worshipped around the world, although few of his worshippers are even faintly aware of that fact. The Egyptians never lost their love for the dog-headed god who carried the young Horus over the heavenly Nile each night towards the Dawn of Eternal Life. Over the centuries, Hermanubis lost his doggy ears and became totally humanoid. As Christianity became the religion of the empire, the boy Horus became the boy Jesus. Hermanubis was no longer called Hermanubis, but rather Christophorus — Christ Bearer.

But the symbolism never changed. He is still the faithful spirit-being conveying the Boy God safely through the deadly waters of the Nile.

The question for us worshippers of Antinous is whether that little boy on his shoulders is Horus/Jesus — or is he just possibly Antinous?

That would give a whole new interpretation to the Tondo of the Two Lovers. Perhaps the artist was trying to tell us that, for the citizens of the Sacred City of Antinoopolis, the Blessed Boy Antinous had come to replace the Boy God Horus, and that Hermanubis was involved in lifting Antinous out of the deathly Nile and carrying him towards the Shore of Eternity.

That is certainly something to consider next time you see a plastic St. Christopher statuette on a car dashboard. It isn't Christopher carrying Jesus, but rather Hermanubis carrying Antinous!

If you listen carefully, you can hear Antinous/Hermanubis/Christopher giggling boyishly in the background at our very mortal mistranslations and miscommunications — which seemingly uncannily turn out to be very uncannily correct!
Posted by Hernestus at 9:00 AM