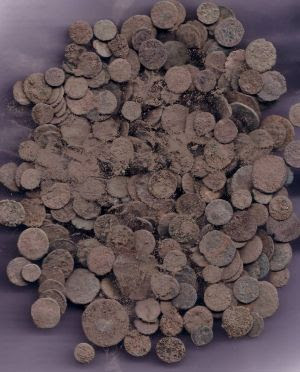 IMAGINE going out into a field with a metal detector and coming up with hundreds of Roman coins bearing the portraits of Hadrian and Antinous. That's what happened to a lucky amateur treasure hunter in the English West Midlands.


Hundreds of coins more than 1,800 years old were found at the undisclosed location in Staffordshire, according to The Sentinel newspaper.


The coins – some with immaculately-preserved images of Hadrian and Antinous – were discovered by metal detecting enthusiast Scott Heeley.


Experts say it is the most exciting discovery in the region since the Staffordshire Hoard, which is the largest haul of Anglo-Saxon gold ever found.


Now officials at Hanley's Potteries Museum and Art Gallery must decide whether to buy the 242 coins and put them on public display.


Deb Klemperer, the museum's principal collections officer, said: "The last discovery of coins similar to these was back in 1998, but there were only around 18 coins in that find.


"This is very unusual for the area because it is quite a large find.


Details of the February find have only just been made public.


Experts at the British Museum have compiled a report on the discovery and an independent valuation committee will identify its worth.


A treasure trove inquest will be held to determine whether the find can be classed as treasure.

Some of the coins, which hail from the first and second centuries, feature images of politician and general Mark Antony, but most are of Emperor Hadrian with a few Antinous coins mixed in.


Ian Richardson, the British Museum's treasure registrar, said: "In the coin world, this is a good find."


Any financial reward will be split between the owner of the Stoke-on-Trent field and 50-year-old Mr Heeley.


The Network Rail maintenance worker, who lives in Hednesford, near Cannock, said: "My detector went off and I looked down and there was an English penny.


"I thought I would put it in my pocket for luck, and then the next thing it went off again and I found silver coins.


"A friend said 'Oh my God, you've hit the jackpot'. And every handful of soil which was coming out contained silver coins. I was totally shell-shocked.


"Some people will spend 35 years metal detecting and find nothing, and I've only been doing it a couple of years."