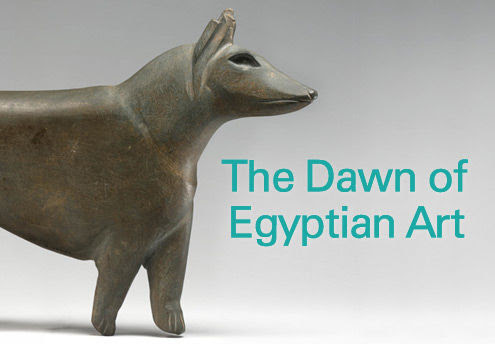 EVERYONE has looked in wonderment at the art treasures of Ancient Egypt. King Tutankhamun, Hatshepsut, Akhenaten and dynasty after dynasty of pharaonic art continue to enthrall millions around the world.

But the Egyptians were making art thousands of years before any of those pharaohs were born. And that most ancient of all Ancient Egyptian art is perhaps even more breathtakingly beautiful for its almost modernist simplicity of line and form.

New York's Metropolitan Museum of Art has put the spotlight on this pre-dynastic art dating back 6,000 years in a new exhibition entitled The Dawn of Egyptian Art.

This is art which pre-dates the pyramids by centuries. During the pre-dynastic period and the very earliest dynasties (4000–2650 B.C.), people living in the Nile Valley began recording their beliefs through paintings, sculptures, and reliefs made for their shrines and tombs.

These works of art capture the evolving world view of these early Egyptians. Images of people, animals, and landscapes, some of which give rise to hieroglyphs, include forms and iconography that remained in use throughout the art of Pharaonic Egypt.

This exhibition brings together some 175 objects gathered from the Metropolitan Museum's important collection of early art and from the collections of twelve other museums in the U.S. and Europe to illustrate the origins and early development of ancient Egyptian art.

The show has just opened and runs through August 5th.
Posted by Hernestus at 9:00 AM