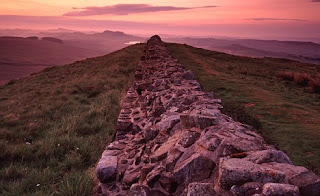 
EARTH-burrowing moles are responsible for digging up some of Roman Britain's deepest secrets in a remote corner of northern England near Hadrian's Wall – and their "finds" include ceramics, pottery, necklaces and bracelets, according to a published report.

They may be the bane of farmers, but some moles are doing the human archaeologists a huge historical favor at Epiacum, an isolated Roman fort 12 miles south of Hadrian's Wall. Because the site is a national monument, any excavation is banned on site.

But humans have never yet introduced any law understood by Mr Mole – and scores of them are churning up Roman artefacts at Epiacum – or Whitley Castle – as they push out their molehills.

Whitley Castle stands on 1,000-acre Castle Nook Farm, and last week a team of 37 volunteers, under the watchful eye of English Heritage, sieved through those molehills to see what our subterranean allies had brought up.

Among the finds were:

– A number of pottery rim fragments from Roman serving bowls and earthenware pots;

– A jet bead from a Roman necklace or bracelet.

"We've had a good day," farmer's wife Elaine Edgar told The Journal newspaper. She is heading plans to develop and promote the fort and recently received a British grant to help her along.

"The Samian ware is the sort of thing the Romans used to keep up with the Joneses and we found a quarter-inch flat, round piece of it.

"Last year we found a small bronze dolphin-shaped piece which we believe to have been a tap-head from the wash-house. It was just lying there on the side of a molehill.

"We also found a number of nails, which settled the argument of whether the Romans used wood or stone for their buildings.

"And this year we have found some really nice pieces – even the weather was kind to us."

All the molehill sites at Epiacum, two miles south of Slaggyford and near the Cumbrian border, were "gridded out" 48 hours earlier in 10-metre squares with rods and tape.

"The moles are able to do what we humans are forbidden by law to do," Elaine told The Journal, "and that is excavate on-site. As farmers we are not allowed to do anything that turns the land over. English Heritage had to be on site yesterday to make it legal for us even to sieve through the molehills."

Now Elaine hopes that she will eventually be able to display the finds made by the moles in a display area on the eight-acre fort site.

"That would be my great wish," she told the newspaper. "I have high hopes, and it is only with the help of the moles that we have been able to find these remains.

"Perhaps we should get them some Roman helmets – then they would be real mighty moles."