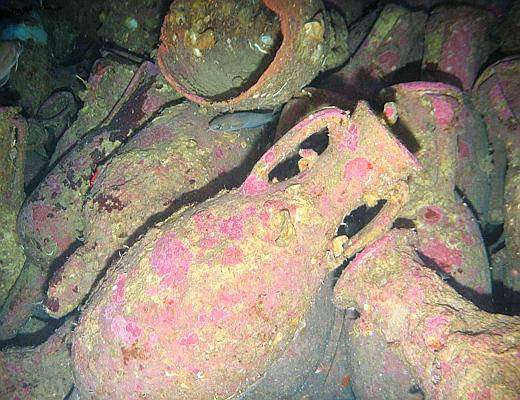 ITALIAN archaeologists say they have found evidence of a smuggling operation aboard a shipwreck dating back to the Antonine Imperial Dynasty founded by Emperor Hadrian.

This may not seem like news, since everyone assumes smuggling was rampant in the past, just as it is now.

But archaeologists need proof before they can make such claims. Similarly, academic historians for the longest time quibbled over calling Hadrian and Antinous "gay," arguing about the semantics involved.

That is why the curator of the British Museum shocked the academic community when he opened the exhibition "Hadrian: Empire and Conflict" in 2008 by holding a news conference and stating bluntly: "Hadrian was gay. We can say that now, but the Victorians had problems with it."

Now archaeologists are saying there were smugglers in Ancient Rome, and no one can quibble.

The amazingly intact wreck of an 1,800-year-old vessel in shallow waters off the coast of Sicily contains a cargo officially consisting of assorted jars once filled with walnuts, figs, olives, wine, oil and "garum" -- a tangy and exceedingly aromatic fish sauce which was something of an acquired taste. Some Patricians considered it a delicacy while others loathed it.

But archaeologists were surprised to find an undeclared consignment of ceramic tiles from North Africa, according to a report by Discovery News. The distinctive tubular tiles were apparently valuable enough for sailors to smuggle them from North Africa to Rome, where they sold for higher prices.

"They are small terracotta tubes with one pointed end. Put one into the other, they formed interlocking, snake-like tiles. Rows of these so-called fictile tubes were used by Roman builders to relieve the weight of vaulting," Sebastiano Tusa, Sicily's Superintendent of the Sea Office, told Discovery News.

Tusa will detail the wreck discovery in a forthcoming publication by the Museum of the Sea in Cesenatico, during a national meeting of underwater archaeology and naval history.

"It was a somewhat tolerated smuggling activity, used by sailors to round their poor salaries. They bought these small tubes cheaper in Africa, hid them everywhere within the ship, and then re-sold them in Rome," Tusa was quoted by Discovery News as saying.

Dating to the 3rd Century AD, the large sunken ship was fully recovered six months ago at a depth of 7 feet near the shore of Marausa Lido, a beach resort near Trapani.

Italian archaeologists, using state-of-the-art submersible probes and sonar, have discovered numerous shipwrecks in recent years which date to the era of the Antonine Emperors, including Hadrian and his heirs.

In one case, experts located five vessels largely intact, with their cargoes of wine, olive oil, fish sauce and other goods arranged in tidy rows of amphorae jars. The experts released photos showing amphorae (above left) neatly stacked just as they had been when the vessels sailed for Rome 1,800 years ago.

That shipwreck site was near the infamous banishment island of Ventotene in the Tyrrhenian Sea between Rome and Naples. Ventotene is where Augustus banished his adulterous daughter Julia the Elder.

Tiberius, Claudius and Nero also banished various of their family members and in-laws to Ventotene.

The waters around the island are noted for being treacherous which is one reason it was considered a good place to banish one's enemies, since they could not easily escape in a small boat.

It is likely that the cargo vessels were swamped in rough seas in the 2nd or 3rd Centuries AD. They appear to have gone straight down without capsizing, landing on their keels on the seabed.
Posted by Hernestus at 9:00 AM