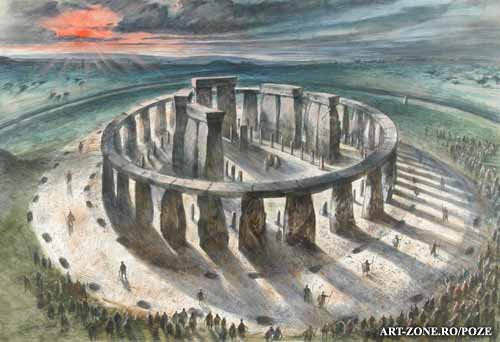 FOR the first time, experts have found geological proof that the prehistoric builders of Stonehenge aligned it to the Solstice axis, and it has to do with an Ice Age "fluke" of terrain.

The discovery was made by accident during road work.

In what is described as a "missing piece in the jigsaw" in our understanding of one of the world's greatest prehistoric sites, excavations confirm the theory that its ancient processional route was built along an ice-age land form which was naturally on the solstice axis, according to Professor Mike Parker Pearson, a leading expert on Stonehenge.

The monument's original purpose still remains shrouded in mystery, but this is a dramatic clue, he said.

The route, known as the Avenue, extended 1.5 miles from the standing stones' north-eastern entrance to West Amesbury.

The discovery came only after the closure of a modern road which bisected the route, allowing archaeologists to excavate there for the first time.

Just below the modern road’s surface, they unearthed ditches dug by prehistoric builders.

Professor Parker Pearson identified naturally-occurring fissures that once lay between ridges which follow the route of the Avenue.

The ridges were created by Ice Age meltwater and naturally point directly at the mid-winter sunset in one direction and the mid-summer sunrise in the other.

Professor Parker Pearson is excited by the evidence, which he describes as "hugely significant".

"It tells us a lot about why Stonehenge was located where it is and why they were so interested in the solstices," he said.

"It's not to do with worshipping the sun, some kind of calendar or astronomical observatory.

"It's about how this place was special to prehistoric people. This natural land form happens to be on the solstice axis, which brings heaven and earth into one."

He explained that Stonehenge is "all about the solstices" and our ancestors could see this in the land.