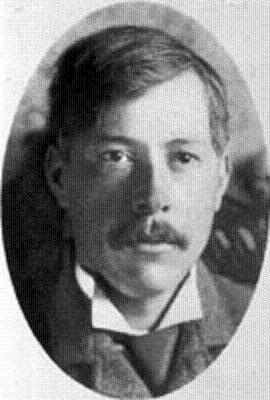 ON December 28th the Religion of Antinous celebrates the life of Saint Edward Perry "Ned" Warren, who died on this day in 1928.

Estranged and ostracized by "decent" socialites, Saint Ned Warren was a famed gay Bostonian art collector who virtually single-handedly built up the collections of the New York Metropolitan Museum of Art and Boston Museum of Fine Arts through his passion for Classical art.

As a sissified schoolboy who suffered the taunts of bullies, he wrote a poem comparing a classmate in whom he was infatuated to Antinous.

He and his lover John Marshall travelled around Europe seeking out and buying art treasures for great museums. They were referred to snidely as "the bachelors of art" among society circles in Britain and America.

But Warren was so fabulously rich, and museums depended on him  so much, that nobody dared say anything to his face about his blatant homosexuality. His gifts to the Boston MFA made up 90 per cent of its Classical collection, one of the finest in the world.

Even so, he found puritanical Boston deeply disagreeable, and spent most of his life in England when he was not at his apartment in Rome.

The famous Warren Cup and Rodin's statue The Kiss are just two of the most well-known objects he rounded up -- both of which were rejected by museums in Britain and America as being too raunchy. Museum curators feared museum-goers could be lured into thinking unwholesome thoughts.

Warren in fact actually commissioned the The Kiss from Rodin, explicitly saying he wanted large genitals on the man. To this day, photographs of the famous statue tend to avoid a full-frontal male view for that very reason.

The Warren Cup is a solid silver goblet which dates back to the 1st Century CE/AD and was found near Jerusalem. It is believed that it was deposited along with other valuables (some gold coins, jewellery and other precious items) in a cache by the servants of a fleeing Roman nobleman during one of several Jewish uprisings. It is even possible that it was buried during the uprising that was crushed by Hadrian's legions.

The cup itself is considerably older, and may date to Republican times. And it is done in a retro-style which was a bit archaic even when it was new.

As the photos demonstrate, the Warren Cup shows two scenes (one on each side of the cup) of a man and a youth having sex on a couch. The silverwork is exquisitely done and the hair and draperies and facial expressions are beautifully rendered. It also reflects a bit of tongue-in-cheek wit by showing a servant boy peering curiously around a door frame at the lovers.

Saint Ned is believed to have purchased the Warren Cup from an antiquities dealer in Italy.
His efforts to sell it to museums in London and the U.S. were rebuffed.

The Warren Cup's unabashedly gay sex theme is impossible to ignore. The cup has been controversial in the art world ever since it first came to light in the 19th Century.

For many, many years, museums on both sides of the Atlantic refused to obtain it (despite its unquestionable value as a remarkably important historical piece of art) because of Victorian and Edwardian moral objections to its "immoral and beastly" theme.

At one time a curator for the British Museum was interested in acquiring the Warren Cub.

But other experts reminded him that one of the members of the board of directors of the British Museum was the Archbishop of Canterbury. The result was that museum officials were loathe to show his reverence even a photograph of the cup, let alone ask him to condone purchasing it for the collection.

So the cup languished in Warren's personal collection for many years and changed hands many times after his death, never ever being put on public display.

The British Museum finally purchased the Warren Cup for a large sum in 1999 -- and even then there was much titillation in the tabloid press.

Ned Warren wrote extensively about his views that homosexuality is a spiritual state of being, something divinely magical. Taunted as a schoolboy for being a bookworm and a sissy (he would get up at 5 a.m. to read Greek until breakfast), he nonetheless had many crushes on other schoolboys. He wrote about them all in his diary, and even wrote a poem about one especially beautiful boy whom he called a modern Antinous.

As an adult, he continued to proclaim his notion of idealized homosexual love, much to the distress of his family in Boston.

He even wrote a book entitled The Defence of Uranian Love about the same time that Oscar Wilde's The Picture of Dorian Gray was published.

He also used his wealth to sponsor the educations of numerous boys and young men who showed promise but had no money.

He was very generous and had a big heart. For example, he heard that the daughter of a vicar in his district in England had become pregnant out of wedlock and was going to be forced to give up the child.

Saying "this is as bad as Boston," he was so outraged that he legally adopted the little boy himself. He allowed mother and son to live upstairs in his home in England at his expense and loudly defied anyone to besmirch her honor or that of Travis, the little boy.

Ned Warren and his lover John Marshall had a stormy, on-again off-again relationship, but they were together at their flat in Rome in February of 1928. On the evening of the 15th, John went to bed early not feeling well. Ned tiptoed in later and kissed him good night and got in bed beside him. John was dead by morning.

Ned never recovered from that blow. He returned to England, where his health declined rapidly. Saying he couldn't face Christmas and New Year's without John, he died in a nursing home in England on December 28, 1928, at the age of 68.

He was cremated on January 1, 1929. But because he had always been blatant about his homosexuality, no members of his family attended the funeral and none of the museums that had benefitted so much from his largesse sent a representative to the memorial service.

His ashes were buried in the non-Catholic cemetery in Bagni di Lucca, Italy, a town known as a spa in Etruscan and Roman times.