MITHRAS TEMPLE IN NORTHERN ENGLAND
WAS ALIGNED TO SUNRISE DECEMBER 25 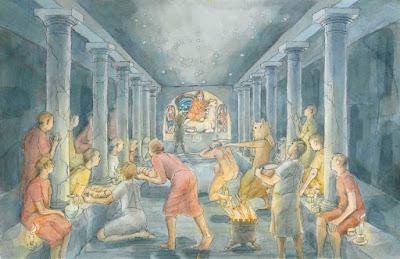 AN ancient temple constructed by a mysterious cult in northern England may have been built to align with sunrise on December 25, to "recall the birth" of the light god Mithras.
A new analysis using satellite maps and a software that can plot the direction of sunrise and sunset revealed that the Mithraeum beside a Roman fort in Carrawburgh, England, lines up with both the winter solstice and December 25th. 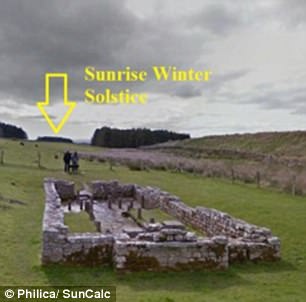 Followers of the cult of Mithras often associated these two dates with the god, and were even said to celebrate the New Year on December 25th, as it marked his birth.
In a paper published to Philica, Amelia Carolina Sparavigna of Politecnico di Torino says the temple at Carrawburgh was designed for the birth of Mithras.
Sparavigna used the SunCal.net software to pinpoint the direction of sunrise and sunset at different times of the year for this location.
And, this revealed "good alignment" for the December 25 sunrise along with the winter solstice (December 21), with a difference of just 0.2 degrees.
"As we can see using software giving the sunrise and sunset directions on satellite maps, the orientation of the temple and the direction of the sunrise on winter solstice are in good agreement," Sparavigna wrote. 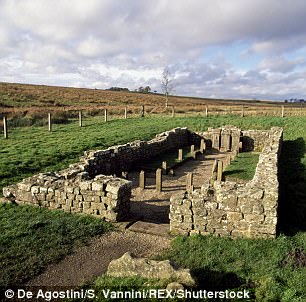 "It means that, probably, the orientation of the temple was chosen to recall the birth of Mithras on December 25."
Worship of Mithras spurred the rise of a mystery cult during the Roman era.
It was practiced from the 1st Century to 4th Century AD, and is linked to the sun god Sol Invictus.
"The cult of Mithras, such as that of the Sol Invictus, who was the patron of the soldiers, was very popular in the Roman army," Sparavigna wrote.

"Both Sol Invictus and Mithras, who were often identified in the same god, are linked to winter solstice.
"Actually, the followers of Mithras worshipped the New Year on December 25, to celebrate the birth of Mithras."
Posted by Hernestus at 12:00 AM