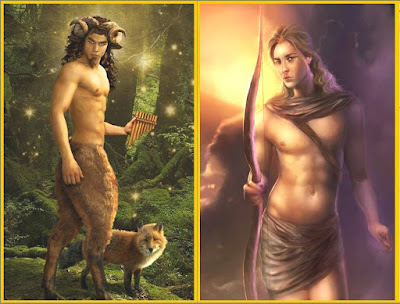 EVER wonder about the origin of Santa's reindeer? They echo Pan, satyrs and fauns who had their own festival in December.

December 5th and 6th is the ancient Roman feast of the Faunalia ... which ironically is still celebrated in Europe and Latin America by millions of children ... who get a visit from Santa and his horned helpers.

Millions of kiddies know that you put your shoe outside the door on the evening of December 5th and that St. Nicholas will fill it goodies on December 6th ... the Feast Day of St. Nicholas.

What few people realize is that old St. Nick is related to Antinous/Apollo ... and his helpers are Pan and his hordes of satyrs and fauns.

The pagan history shows that St. Nicholas is a vastly more complex being than most Christians could imagine, stemming from the Temples of Apollo and Artemis in Asia Minor (the birth country of Antinous) which would later be the birthplace of the mythical Nicholas.

The truth is that when you see a department store Santa, you are seeing only a composite being whose multitudinous composite aspects (many of them very dark and spooky) trace their origins back to the beginnings of mankind.

If you look very, very carefully, you will see the face of Antinous/Apollo shining through the centuries of folk customs under a variety of names including Santa, Sinter Klaas, das Christkind and Kriss Kringle. 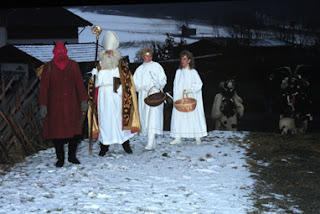 In some parts of Central  Europe, St. Nick goes from house to house on December 6th accompanied by a coterie that includes figures resembling Pan, Apollo and Artemis (Austrian Alps photo right).

Apollo's sister Artemis also had a cult center in nearby Myra, where Nicholas grew up and allegedly became a "bishop." Myra's main cult was dedicated to Artemis Eleuthera, a distinctive form of Cybele, the ancient mother-goddess of Anatolia. She had a magnificent temple in Myra.

Unfortunately, St. Nicholas was zealous in his duties as bishop and took strong measures against paganism. The temple of Artemis and the Apollo oracle were among many other temples in the region that he destroyed. It is said that the very foundations were uprooted from the ground, so complete was its destruction, "and the evil spirits fled howling before him".

St. Nicholas was never officially canonized by the Church. He simply usurped the popularity of Artemis and Apollo and promoted his own reputation for being a protector and a giver of good things. 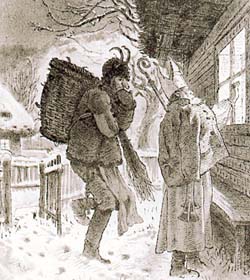 And in a lot of places, Santa has several dark and scary sidekicks — all related to Pan, who also originated in Asia Minor.

In the Alps, Santa's helpers take the form of a demonized Pan who chases and abducts children who have been naughty. He is called Krampus and, thanks to the Internet, Krampus is becoming widely known in English-speaking countries.

In the Nordic and English version, of course, all that is left of Krampus with his horns and hooves and fur is the reindeer which accompany Santa's sleigh.

In Holland, St. Nick is accompanied on December 5th/6th by a Moorish youth wearing a turban and a fur-trimmed costume called Svarte Piet, who delights in teasing naughty children.

In English-speaking countries, prudish Victorians stripped Santa of all his impish devilry. Santa is nice to all and punishes no one.

In Europe, Santa's Dark Side still prowls — marches defiantly, in fact. In a way, the Anglo-American Santa Claus was lobotomized by the Victorians so that he is only docile and sweet-humoured. 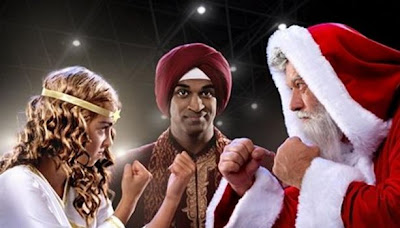 He is composite spirit being who in English-speaking countries is called St. Nicholas, Santa Claus or Father Christmas.

But the deeper you go back into the forests of Europe, the more differentiated this ancient being becomes so that you see his various  component parts — including Antinous-Apollo — all competing against each other — sometimes morphing into each other.