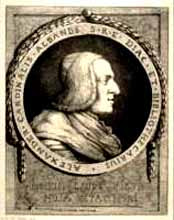 ON December 11th the Religion of Antinous honors SAINT ALESSANDRO ALBANI, who was an Italian aristocrat and cardinal, and a collector and patron of the arts.

It is largely thanks to Cardinal Albani that Antinous experienced a resurgence of interest in the 18th Century which continues to this day.

It is also believed that Albani secretly worshiped the Beauteous Boy as a gay god.

Albani became a trend-setter and an arbiter of taste. Albani, whose sexuality was ambivalent, and the openly gay Winkelmann more or less single-handedly launched a craze throughout the European aristocracy for Classical art.

When he was 29, by special dispensation from his uncle Pope Clement XI, Alessandro Albani was made a Cardinal, although he had never been a priest or member of a lower order.

Indeed, he would have preferred to pursue a military career. But chronic eye problems, which eventually resulted in total blindness in old age, convinced him to take up his uncle's generous offer.

He is said to have been a continuing cause of great concern to his uncle, due to his worldly and irreligious obsessions, first among these his passion for art.

Cardinal Albani used his vast wealth to collect Classical art, and to patronize artists of his day, such as Anton Raphael Mengs, and the "Father of Archaeology" Johann Joachim Winckelmann, who was an open homosexual.

The art collection of Cardinal Albani contained an extraordinary number of statues of Antinous, and these were studied by Winckelmann, who had taken up residence in the sprawling and very lavish Villa Albani outside of Rome (pictured at left). 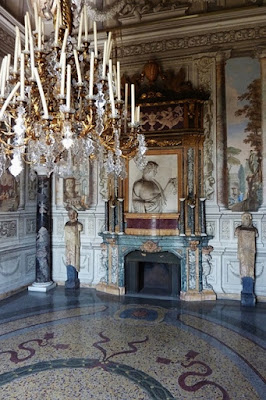 And Antinous was the pre-eminent example of male beauty in Classical art. Every aristocrat in Europe wanted a statue or Antinous. And monarchs such as Frederick the Great of Prussia (who never married and favored intimate friendships with males) sent out experts to find statues of Antinous.

Thus, the science of archaeology was born largely through a desire by aristocrats to furnish their palaces with the sort of Antinous-style Classical art which Albani had made fashionable.

By the time he died on December 11th in the year 1779, it was rumored that Cardinal Albani, along with his intimate friends Winckelmann and neo-classicist painter Anton Mengs, had been secret worshippers of Antinous and Priapus.

It was asserted that they reinstated the religion of the Beloved Boy as a kind of underground cult along with other, unnamed persons.

For this reason, though based largely on rumor, Cardinal Alessandro Albani is sanctified as a Saint of the Religion of Antinous.

Although he was a Cardinal of the Catholic Faith, he may in fact have been the first High Priest of Antinous since the extermination of the ancient religion 1,300 years before.

Albani's secret cult ... assuming it truly existed ... is the only known predecessor since ancient times to the current Religion of Antinous.