ROMAN TEMPLE OF MITHRAS
REBORN IN THE HEART OF LONDON 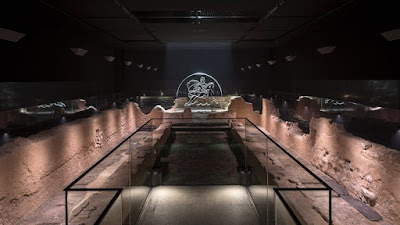 SECRET, males-only rituals from the ancient cult of Mithras have been recreated in an original Roman temple after it was reconstructed several metres below London’s street level.

Mystical chants, ghostly light effects and the sounds of bells, horns and other Roman instruments form part of a sensory reconstruction that will greet visitors at the London Mithraeum museum, which opened to the public recently. 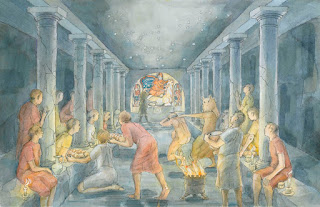 Sophie Jackson, director at Museum of London Archaeology, which conducted a dig on the site, said the building was a rare trace of the city’s Roman past that people could experience first-hand.

“London Mithraeum is not only a truthful presentation of the archaeological remains of the temple of Mithras, it is a powerful evocation of this enigmatic temple,” she said at an event to mark the opening. 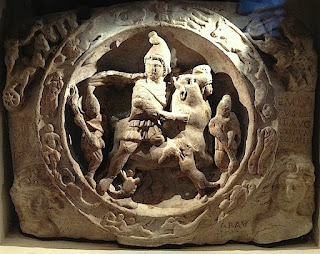 One of the most important Romano-British sites of the 20th Century, the 3rd-century Temple of Mithras was discovered in 1954, after wartime bombing devastated the buildings above it and its foundations were later spotted by archaeologists.

The discovery sparked huge public interest, attracting 30,000 people a day to queue up and view the site over a two-week period.

Taken to pieces to make way for an office building, it was rebuilt ... “roughly and somewhat inaccurately”, according to Mola archaeologists ... in the 1960s around 100m away.

The museum housing the temple has also put on display hundreds of objects found during an archaeological dig on the site five years ago.