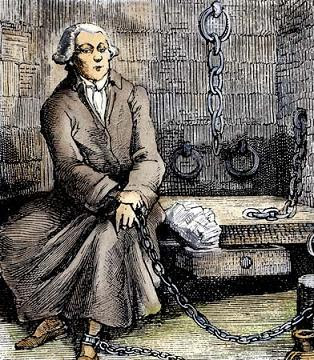 ON December 2nd, the Religion of Antinous honors the Marquis de Sade for being the first person since ancient times to proclaim publicly his adoration of the beauty of Antinous.

The Marquis de Sade was himself probably what we would nowadays call ambi-sexual. At any rate, homosexual activity is an important item in his program of revolutionary sexual libertinism.

The Comte Donatien-Alphonse-François de Sade, more often called the Marquis de Sade, lent his name to the complex psycho-sexual phenomenon of "sadism" ... that is, the derivation of pleasure from cruelty through inflicting physical pain, mental suffering, or both.

Yet there is more to Sade's writings than sadism -- the term coined by Krafft-Ebing in his "Psychopathia Sexualis" (1876). For running  throughout the Sadean oeuvre of plays, stories, essays, novellas, and letters ... and often overlapping with the most calculated outrages of his obscene novels ... is a philosophical discourse on freedom, power, evil and desire. 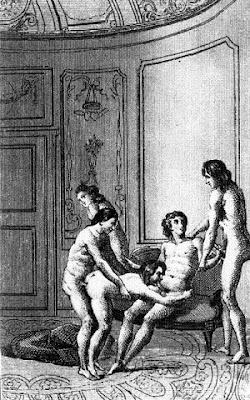 Donatien Alphonse Francois de Sade was born June 2, 1740, in Paris, France. The Marquis grew up in the decadent excesses of pre-revolution France's aristocracy.

Sade's father, for instance, was arrested while "cruising" the Tuileries Gardens for male hustlers. Throughout most of his life, the Marquis pursued bizarre forms of sexual gratification, he was arrested for his excesses numerous times and spent several periods of time imprisoned.

In 1772, he was sentenced to death as a "sodomite." Though the sentence was lifted in 1776, he was imprisoned for many years. Early in July 1789, as mobs rallied for the revolution, he screamed to the masses from his cell window in the Bastille, telling them that the prisoners were being slaughtered by the guards on orders of the aristocracy.

The mob subsequently freed him, but the cloud of immorality never lifted and he died broken in mind and body.

It is from these works that the word Sadism is derived because the philosophy of sexual violence and domination was delineated and demonstrated for the first time by the Marquis in his numerous and detailed catalogues of perversions.

One of these works, entitled "The 120 Days of Sodom" was written  while in the Bastille. When the prison was stormed during the French Revolution, many of the works of the Marquis de Sade were lost, including this work. It was miraculously rediscovered in 1904, rolled up in the frame of a bed, and subsequently published.

We consecrate the memory of the Marquis de Sade because he was a sexual revolutionary, who spoke quite openly about homosexuality, and who freely acknowledged that his valet Latour was his personal sodomizer.

And he was among the first to take up the name of Antinous for beauty and homoerotic purposes, naming one of the characters in "The 120 Days of Sodom" after Antinous, describing him in this way:

"Antinous: so named because, like Hadrian's favorite, he had, together with the world's loveliest prick, its most voluptuous ass, and that is exceedingly rare. Antinous wielded a device measuring eight inches in circumference and twelve in length. He was thirty and had a face worthy of his other features."