ANTINOUS HAS A NEW PRIEST
IN RIO DE JANEIRO BRAZIL 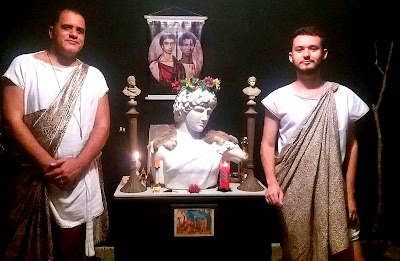 THE modern-day Religion of Antinous has a new priest .. the second priest in Brazil and the eighth worldwide! Michellus Lupercus (right) was consecrated in ceremonies held in at Templo de Antínoo in São Paulo and officiated over by Priest Decus Lupercus (left) at midnight during the cycle of the Cancer Full Moon.

Michellus will found his own temple in Rio de Janeiro. He already has one other founding temple member, Paulo Ricardo, who was in attendance at the consecration ceremonies. 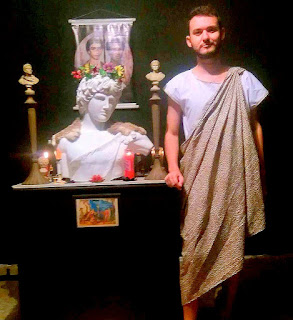 "With Antinous I learned to recognize my sacred homosexuality, I started to see myself as sacred in my sexual expression. The Gods are diversity and they are present in our diversity. This is the perception I want to bring to other LGBT people. I want to be able to awaken the purple flame in the hearts of those who do not feel they belong due to their sexual orientation and gender identity. May the sacredness be in the hearts of those who burn in the purple flame of Antinous. Ave Antinous!" declared Michellus in his first speech as a Priest.

He was consecrated by Decus Lupercus, first priest of Antinous in Brazil.

′′Ave Antinous!", declared Decus Lupercus. "With the arrival of Michellus, the Lupercus line of Brazil grows not only in size, but also in effectiveness and energy. Our new brother will make beautiful work in Rio, starting with the creation of the Carioca Temple of Antinoo, whose foundation stone was also laid at this ceremony."

The Rio de Janeiro Carioca Temple already has two members, as Paulo Ricardo accompanied the new Priest to São Paulo to affirm his devotion to Antinous. "Within the cult of Antinoo I relate greatly to the trans god Hapi and I wish I could dedicate myself to him in the future, helping other trans men like me," he said.

Michellus Lupercus of Rio de Janeiro made his solemn vows at the Antinoo Temple in São Paulo under the auspices of the full moon, which the Brazil adherents call the Roman Moon, as it was considered auspicious to consecrate the priesthood and establish the cult of Antinoo in Rio.

Michellus vowed: "I want to be a priest of Antinous to expand and spread the sacred homosexuality around the world, the sacredness of homosexual and LGBT living, serving him as one of his representatives on Earth, a representative of homotheosis. the purple flame for those LGBT people who need it. I want to be like one of the petals of His lotus, like a spark of His purple flame of love. I want and hope to be able to do the best as my service to Antinous ... this is my will as priest of Antinous. "

The founder of the modern-day religion of Antinous, Antonius Subia of the Hollywood Temple of Antinous, said: "I offer my blessing to Michellus Lupercus as a priest of Antinous. May Antinous protect and guide him."