THE ANTINOUS BUST WITH BREAD OFFERING 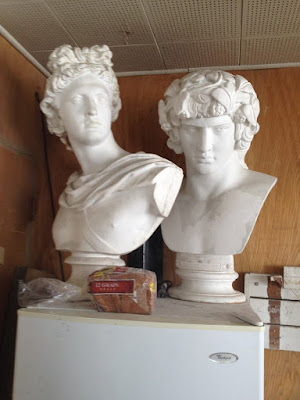 OUR religion's founder Antonius Subia is in London today, making a pilgrimage to the British Museum to see the original Townley Antinous bust.

As he gazes upon the original bust ... he smilingly remembers the first time he saw the replica Townley Antinous which was cast from a mold taken from the original at the British Museum.

That was during a visit to a well-known bronze foundry in Los Angeles where replicas of famous works of art are made. It was there that he saw Antinous perched atop a refrigerator ... with a loaf of American sandwich bread in front of it as if in offering.

Here is the memory in his own words:

"This is the infamous Antinous bust with offering of bread. When my friend Rick took Priest Uendi and me to the bronze foundry (very early in the morning thank you) after a Boar Hunt ceremony, he told us that the owner was looking to sell his plaster cast of the Townley bust from the British Museum, a life-size cast taken from the original, and that he could talk the owner into selling it to me for a good price, we were spell-bound.

"When we arrived we found that the cast was being stored in the employee break room on top of the refrigerator with a loaf of bread ... like a Mexican offering.

"Apollo seems to think the offering was only for him.

"Antinous says, 'I'm getting out of here ... you can have the bread and fridge top all to yourself'."