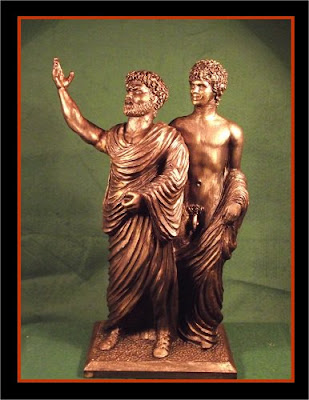 A British artist is featuring Antinous and Hadrian in an exhibition of the most exquisitely remarkable sculptures for Gay History Month in February in Cornwall.


The CORNWALL FREE OPEN STUDIO LGBT History 2016 Exhibition consists of composite sculptures of mythical, religious and historical LGBT figures which (rightly or wrongly) are known, accredited or alluded to having same-sex relationships in their lifetimes/histories.

The artist also intends the sculptures as a metaphor.

Gay equality and protection in law may seem firmly cast, but the ebb and flow of LGBT history demonstrates the pendulum of homophobic prejudice has a nasty habit of swinging back. 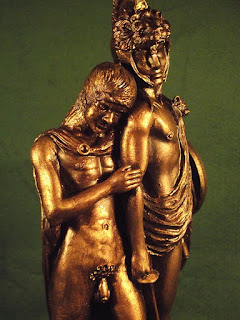 For example, one only has to think of very liberal attitude towards LGBT persons in Berlin in the early 1930s.

The Cornwall exhibition sculptures "look" like they are solidly cast in Bronze.

In reality only a thin skin veneer of bronze patina paint covers up very fragile composite assemblage construction beneath.

The sculptures consist of armature maquette construction made of paper, foil, plastic, cardboard, wood, plasticine and found objects ... a brilliant metaphor for the fragility of LGBT rights and freedoms in our modern world!