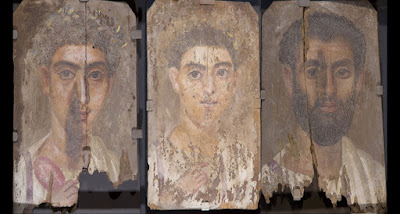 THE fabled mummy face plates found at Antinoopolis and the nearby Fayoum Oasis have intrigued experts for decades … and now one expert says analysis reveals the stylistic techniques of individual artists ... and their artistic influences from the far corners of the Roman Empire.

These paintings, created for mummies in the heyday of the city of ANTINOOPOLIS, sharply departed from Egyptians' previous, simpler artworks and were among the first examples of modern Western portraits.

The mysterious FAYOUM MUMMY PORTRAITS date to 1,900 years ago, when the Roman Empire controlled Egypt and Antinoopolis was a thriving city.

Three such portraits of Roman-era Egyptians, found more than a century ago at site called Tebtunis, were created by the same artist, archaeologist and materials scientist Marc Walton reported February 14 at the annual meeting of the American Association for the Advancement of Science.

Identities of the boy and two men in the portraits are unknown, said Walton, from Northwestern University in the USA.

But he said separate computerized analyses of colors and shapes in the stylistically similar paintings revealed that brushstrokes of the same width were used to apply the same pigment mixes to different parts of each portrait.

All three portraits, for instance, included a purple shoulder sash that the artist painted with a blend of indigo and a red pigment derived from the madder plant.

Many pigments in the portraits probably came from Greece, Walton said.

But the paintings also suggest even more distant influences: Walton's team traced red lead used in Egyptian pigments to Spain and wood on which the portraits were painted to Central Europe. Egyptians traded over long distances by 3,400 years ago (SN: 1/24/15, p. 8).

Now Walton plans to study 12 more Egyptian mummy portraits, as well as paintings of women in pink garb and ones of military gods that have also been found in Egyptian tombs.