THE LOW-DOWN ON ROMAN MAKE-UP 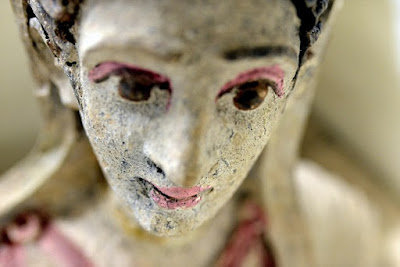 IN an academic world traditionally dominated by men, there has been little scholarly study done on make-up ... until now.

The Romans set high standards in terms of female beauty: flawless skin, a pale complexion with just a hint of pink, styled hair in an alluring color and large bright eyes.

In pursuit of this ideal, women had recourse to cosmetics, applying a wide variety of products, including white lead as foundation, almond oil as face cream, soot as eye makeup, hair dye made from the juice of elderberries, arsenic to remove unwanted hair and the dregs of wine as blusher.

In the contemporary literature, almost exclusively written by men, makeup became a means of expressing ideas of wealth, health, status and gender as well as beauty.

Cosmetics often received a negative press. Its use was satirized and presented as an inferior foil to natural beauty in much of the surviving elegiac poetry.

In contrast, however, Pliny the Elder's Natural History offers more factual information, while in the poems of Ovid cosmetics are presented positively, as a feature of sophisticated urban living.

The required elements of female Roman beauty, such as a pale complexion and large dark eyes, are not only described in literary texts but are also to be found in paintings, funerary reliefs and mosaics.

Idealism is the rhetoric of the visual image and, just as pictures of women in the fashion pages of today's magazines are airbrushed and Photoshopped, presenting us with women who bear little resemblance to ordinary people, a similar contrast existed between the representation of women in Roman art and their counterparts in real life.

There is, in fact, little evidence that clearly depicts Roman women actually wearing makeup, but there are a number of examples of women applying beauty products.

In addition to the toilette, objects visible in these works of art include mirrors, spoons and palettes for preparation and bottles and boxes for storage, which survive in considerable quantities among the small finds in the archaeological record. They are the detritus of everyday life.

The article above was originally published at HistoryToday.com.