EXHIBITION IN FRANCE FOCUSES ON HADRIAN
AND HIS PASSION FOR ANTINOUS 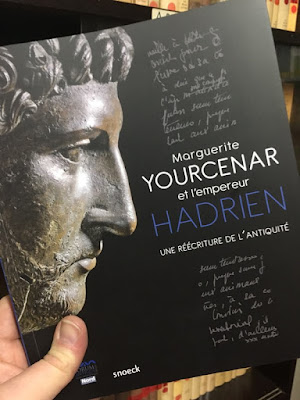 IN France this year? Be sure to visit the Archaeological Museum Nord, in the French town of Bavay on the Belgian border, which is hosting an exhibition devoted to the book "Memoirs of Hadrian" from 4 February to 30 August 2016.

You can see busts and statuary of Antinous on loan from major world museums ... and there is even an Antinous cut-out which allows you to pose as Antinous!

The exhibition focuses on the lives of two people who never met ... but who are inextricably intertwined: Emperor Hadrian and Marguerite Yourcenar Bavay, whose landmark Mémoires d'Hadrien (Hadrian's Memoirs) is considered by many to be the finest historical novel of the last century.

This exhibition reflects both literature and archeology, fact and fiction, by showing archaeological objects from the time of Hadrian, objects that belonged to Marguerite Yourcenar and showing parallels to Hadrian's enquiring mind and the author's. 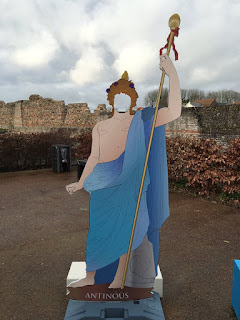 It is the first exhibition in France about Memoirs of Hadrian and traces the author's life and parallels to the life of Hadrian.

The exhibition in Bavay is divided into five thematic sections underpinned by the literary frame Memoirs of Hadrian.

Starting with a section devoted to the research of Marguerite Yourcenar, the exhibition covers various life themes of Emperor Hadrian ... the man conscious of his roots and those of his family, the politician, the emperor, builder and the esthete, friend of the arts and of Hellenic culture ... culminating with his passion and his establishment of the religion of Antinous. 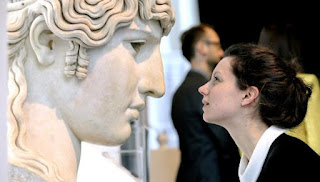 Thus, the exhibition explores the place of Antique in the literary work and touches the question of the border between archaeological data and literary imagination.

The genius of Yourcenar's book is that generations of readers have believed it to be the true, actual memoirs of Hadrian ... and this exhibition encourages visitors to believe ... at least for a short time ... that it is indeed the authentic, historical memoir of the Roman Emperor. 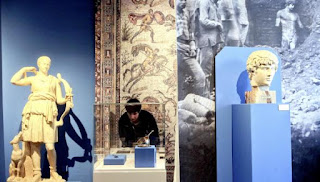 On view are books, manuscripts, original editions of Marguerite Yourcenar along with statuary, busts, coins, inkwells and lamps from the time of Emperor Hadrian.

Fifty works are on loan from the Louvre, the British Museum, Petite Plaisance, the Museum Ingres (Montauban), the Gallo-Roman museum in Lyon Fourvière museum of Fenaille (Rodez).

Also on view are objects from Hadrian's Villa (Tivoli), the Musée Saint-Raymond (Toulouse), the Picardie museum and the North France Archives.