TEENAGER CLIMBS THE GREAT PYRAMID
IN THE FOOTSTEPS OF ANTINOUS 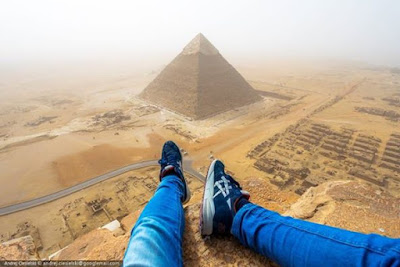 NO doubt following in the footsteps of Antinous 1,900 years earlier, a teenager has climbed the Great Pyramid at Giza.

We know that Antinous and Hadrian saw the Pyramids in 130 AD. While there is no record that he climbed them, we can scarcely believe that he was not tempted.

Similarly, a German teen broke decades-old laws and risked prison after he illegally scaled an Egyptian pyramid so that he could post the photos and videos of the risky adventure to his blog. 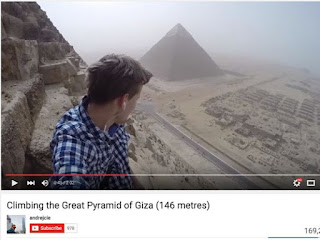 Andrej Cieselski, an 18-year-old from Munich, illegally climbed the 4,500-year-old Great Pyramid in broad daylight earlier this month for the sake of the breathtaking photos and videos he took while on top.

Cieselski, who routinely pulls these climbing stunts called “roofing,” where he dangles off tall sculptures and documents the moment, wrote about the tomb climb on his website.

"Walking around in the complex I was waiting for the right moment to start climbing The Great Pyramid of Giza," Cieselski wrote. 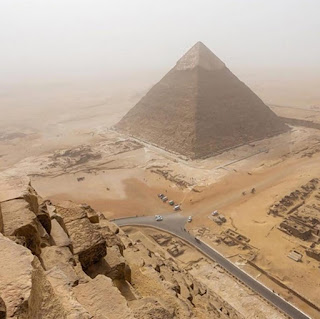 The nearly 500-foot (146 meters) ascent of the tomb, which is the oldest and largest of three pyramids in Giza, took the teen eight minutes to pull off, he said.

"When I started climbing a street seller was standing behind me but I didn’t care about him I turned around, he laughed and I continued climbing," he said.

He flouted decades-old preservation laws to ascend one of the Seven Wonders of the Ancient World.

Authorities noticed the daredevil teen halfway through his eight-minute ascent.

"At the half some people got attention on me and looked up to (me.) That’s how the police spotted me. They shouted something in Arabic I think but I didn’t care and kept going while listening to music," he posted. 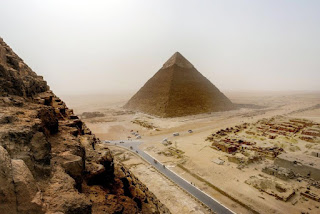 The risky climb produced rare and spectacular views from the top.

Cieselski’s feet dangled over the edge of the top, which looks out onto a hazy view of a nearby pyramid and its desert surroundings.

"It was absolutely surreal standing on top of one of the wonders of the world and something that I will never forget. I wanted to experience Egyptian culture and I definitely managed that," Cieselski said.

Egyptian police waited for Cieselski at the bottom of the pyramid and briefly detained him and threatened to take him to the German embassy, but eventually let him go with a slap on the wrist.
"After a while I was released without anything further happening," he said.

Cieselski sat atop some of world’s tallest skyscrapers in Hong Kong and Dubai and took photos of the stomach-churning views.

Click here for the full video of his breath-taking ascent: