LITTLE IVORY EGYPTIAN ARTEFACT
IS A BIG VICTORY OVER LOOTERS 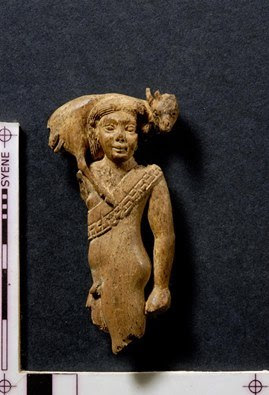 IT is a small victory, but a big victory symbolically ... as officials have recovered one small artefact that was looted in the rampage of chaos following Egypt's revolution in 2011.

Egypt's Embassy in Berlin has received an ivory statuette that dates back to the 7th or 8th Centuries BC as a preliminary step to repatriate it to its place of origin.

The statuette had been smuggled outs of Egypt in 2013 as a result of the state of insecurity that followed the 25th of January 2011 Revolution, stated Dr. Eldamaty, Minister of Antiquities.

General Supervisor of the Repatriated Antiquities Department, Sha'ban Abdel-Gawad added that the Antiquities Ministry in collaboration with the Egyptian Ministry of Foreign Affairs and other concerned authorities managed to stop selling the statuette after it was seen displayed in Aton Gallery in Germany.

The 4.8 cm (1.75 inch) statuette (in the photo above) was stolen from an archaeology storage site in Aswan and it represents a standing man holding a deer or gazelle over his shoulders.

Looting has been rampant in recent years at many sites, including ANTINOOPOLIS.

At a museum only a short distance from Antinoopolis in Upper Egypt, rioters even ransacked THE MINYA MUSEUM as police looked on helplessly. The photo at left shows one of the statues stolen from the museum.

Authorities and preservationists launched a media campaign for the return of looted artefacts, including rewards for information and return of stolen treasures.