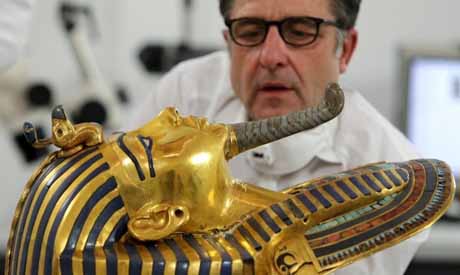 THE famous golden mask of Tutankhamun is being scrutinized inside and out for tell-tale clues that it may have been designed for Nefertiti rather than the boy king Tut, according to a top expert.

German conservator Christian Eckmann made the disclosure in an exclusive interview with AHRAM ONLINE about the ongoing restoration work on the golden mask.
British archaeologist Nicholas Reeves claims NEFERTITI may be buried in hidden chambers behind secret doors in Tutankhamun's tomb. He suggests that the tomb may have been built for Nefertiti, but was hastily rededicated to Tut when he died unexpectedly.

Reeves says the fact that the golden mask has pierced ears for earrings indicates it was designed for a queen. 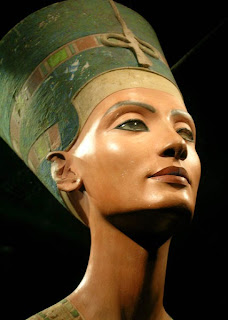 "This hypothesis was suggested long ago but has never been profoundly investigated," Eckmann told Ahram.

"We are taking this opportunity to study the technique used to manufacture the mask as well as investigating the controversial areas mentioned by Reeves (face, the holes of the ears and the cartouche) to gain more knowledge about it," he said.

However, Eckmann said he has doubts about the theory that only queens had pierced ears, not kings.

"I am not an Egyptologist to confirm that, but as a professional restorer I can confirm that the mummy of king Tutankhamun has holes in both of his ears and if you look in Amarna depictions you will see depressions in the ears of all males," Eckmann said. 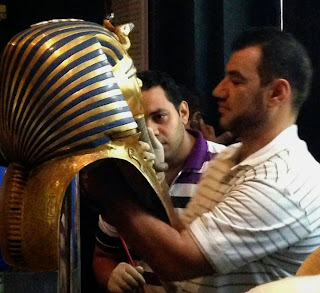 "So I cannot say definitely but I would not be surprised if you found ear holes on other depictions," he said.

"The mask is in a quite stable condition and is not in any kind of danger except for the beard and its botched restoration. The mask is made of gold metal that is not corroding," Eckmann said.

"We are using the chance now to gain a detailed microscopic study of the mask’s ancient manufacture technique, which has never been carried out since its discovery in 1922, to determine what materials and techniques were used," he added.

He expects the restoration work to take about two months. For the full interview: CLICK HERE.