STOLEN FRAGMENT OF A STATUE
RETURNED TO HADRIAN'S WALL MUSEUM 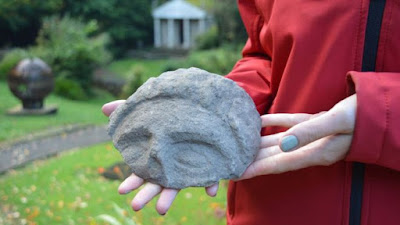 AN artefact that was stolen from a museum at Hadrian's Wall four months ago has been returned by unknown persons.

The fragment of the head of a young male was taken in June, after being forcibly removed from a display at VINDOLANDA Fort.

But it was left anonymously over the weekend at the doorway of a site excavation building.

The museum described its discreet return as a "huge and delightful surprise". 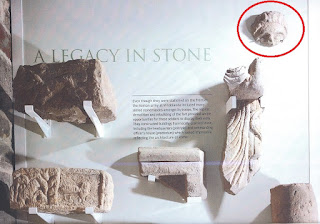 Archaeologist Lauren Wilkinson, who made the discovery, said: "It was a slightly surreal moment, after it was stolen we all thought that was it and we would never see it again.

"We can only assume that the person who took the object had a change of heart, they have done the right thing by returning it.

"We are extremely thankful to be reunited with this object and it will soon be returned to the museum display for all to enjoy."

The statue had been on display in a number of pieces and the stolen piece (circled in red in the photo above) shows a forehead, hair line, eyes and part of a nose of a young male.

Apparently, the thief climbed up onto the exhibit dais and pried the piece off the wall and carried it off under their coat. Other parts of the statue must have been too big to be taken unnoticed.