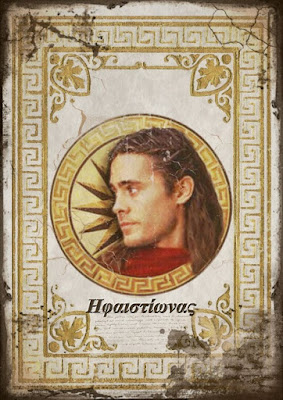 NEW evidence has been discovered which indicates the mysterious and very large tomb at AMPHIPOLIS in Macedonia may have been built by Alexander the Great for his male friend and lover HEPHAESTION.

Katerina Peristeri, archaeologist in charge of the excavation of the Amphipolis tomb, told a news conference that her team discovered the monogram of Hephaestion in three inscriptions, project contracts, for the construction of the monument.

Peristeri also said that the new findings show that the monument was commissioned by a powerful individual of that era, which could be Alexander himself.

According to ancient historian Plutarch, when Hephaestion died suddenly in Ecbatana, Iran, "Alexander asked architect Deinokrates to erect shrines all over the country," she said. 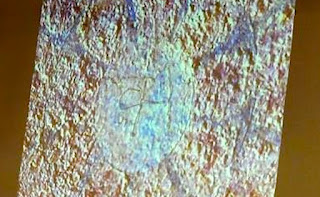 The monogram is shown here left.

Peristeri believes the complex was built in the final quarter of the 4th Century BC (325-300 BC) and was used until Roman times.

When it was discovered in 2014, the Amphipolis tomb initially was hailed as the biggest archaeological find of the century ... with  Greece's then prime minister proclaiming that this was "most certainly" the LOST TOMB OF ALEXANDER.

Despite a media feeding frenzy, months of painstaking research by Peristeri and her team revealed that it was very unlikely to be Alexander's tomb.

Instead, they held out tantalizing possibility that Hephaestion or the MOTHER OF ALEXANDER or possibly Roxana the WIFE OF ALEXANDER may have been entombed there. 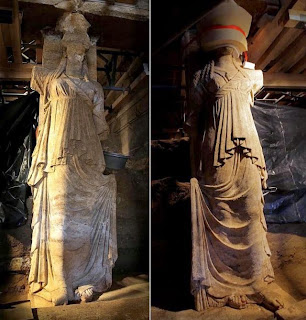 Analysis of the scattered remains now shows that bones found in the tomb belong to:


In addition, non-human bones were found, probably those of a horse.

Archaeologists found skeletal material belonging to a man who may have been the original inhabitant in the tomb, very close to the floor. The body belonged to a man who stood at 1.60 meters in height (5 ft. 2 in.), whose bones had been shuffled by looters.

The skeletal remains and bits of wooden debris were interspersed by iron and copper nails along with ivory and glass decorative adornments for the coffin.

The discovery of skeletal remains raises almost as many questions as it answers, since wood was not thought to have been used for royal coffins in the time of Alexander the Great. Royals were cremated in Ancient Greece. However, it could be the body of a non-royal person ... such as Alexander's lover Hephaestion.

Even amidst the initial media hype about the LOST TOMB OF ALEXANDER Peristeri (shown left) said she rather more suspected it could be the tomb of Hephaestion ... and now here theory is being proved right.

Regardless who the original tomb occupant was, the dig site has revealed amazing artefacts including mosaic flooring of the second chamber ... revealing the Abduction of Proserpine/Persephone by Pluto.

The symbolism of the MOSAIC, which was discovered in the second chamber along with CARYATIDS, vastly increases the chances that this tomb houses a member of the Macedonian royal family ... or friend.

Alexander sailed from Amphipolis to Asia.

However, it is almost certain that his tomb is located in Alexandria, since people such as Julius Caesar, Hadrian and Antinous are supposed to have visited his burial site there.

Posted by Hernestus at 1:03 PM