WALK IN THE FOOTSTEPS OF ANTINOUS
THROUGH ANCIENT ROME'S VIP TUNNEL 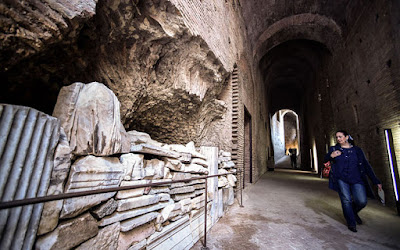 A vast underground passageway that allowed Rome's emperors … and privileged members of the Imperial coterie such as Antinous … to pass unseen from their hilltop palaces to the Forum is open to the public for the first time.

The 2,000-year-old "imperial ramp" descended from the top of the Palatine Hill, where successive emperors built lavish palaces, down to the temples, market places and courts of the Forum in the valley below, from where the Roman Empire was governed.

Lit by flickering torches and protected by imperial guards, the high-ceiling passageway was so vast that emperors could have comfortably passed through it on horseback. 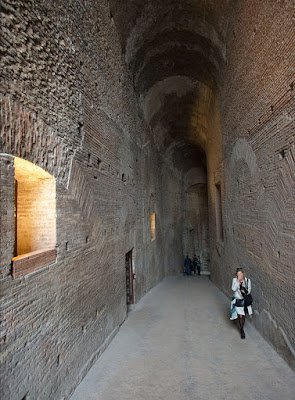 The rest are believed to have been destroyed in an earthquake in the ninth century AD.

The covered walkway, which is enclosed and would have been invisible to the soldiers, slaves and plebeians going about their business in the Forum, was first discovered in 1900.

The tunnel was partially excavated but then was then abandoned for another century, until archaeologists embarked on a major restoration project a few years ago.

It has now been completed, and tourists are now able to tread in the footsteps of the emperors.

"For centuries, this was the entrance to the imperial palaces on top of the Palatine Hill," said Francesco Prosperetti, the cultural heritage official in charge of the project.

"When it was discovered, this was a little-known corner of the Forum," he added. 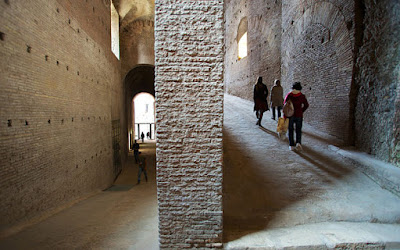 Once tourists climb to its highest point, emerging from the arched passageway into the daylight, they have a panoramic view of the ruined temples, marble columns and ancient streets of the Roman Forum.

The entrance to the imperial ramp was a huge gateway which has been reconstructed using pieces of the original marble architrave.

The gate led to a reception hall which was converted into a church in the Middle Ages.

Halfway up the steep passageway archaeologists found the remains of a latrine, built from stone and marble, which would have been used by imperial guards.

The ceilings are 11 meters (36 feet) high, so it really is a big structure," said Patrizia Fortini, an archaeologist.

"We don’t know whether carts would have travelled up and down it with supplies, but certainly horses would have been able to." 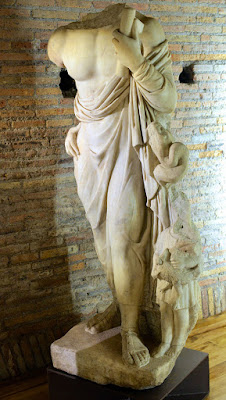 Rooms that lead off the ramp – possibly used by detachments of guards – have been converted into a mini-museum of Roman artefacts found close to the passageway.

The small museum's artefacts include an exquisite statue of Hercules, his shoulders wrapped in the pelt of a lion.

Also found was this exquisite headless statue of AESCULAPIUS with a serpent coiling at his side … the serpent which survives as a symbol for pharmacies today. At his side, protected by the serpent, is a marble statue of a child sacrificing a rooster, which was found close to a nearby sacred spring.

The covered ramp was commissioned by the Emperor Domitian in the late first century AD at the height of his reign.

He constructed a vast new palace on the Palatine, which is the origin of the words "palazzo" and "palace."