ANCIENT ROMANS HAD HEALTHY TEETH
BECAUSE THEY HAD NO REFINED SUGAR 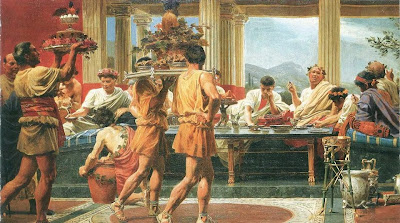 THE ancient Romans may not have had access to modern dentistry, but they did boast strong, healthy teeth thanks to the absence of one key ingredient from their diet: refined sugar.

Researchers in Pompeii, Italy, working on the remains of those killed by the eruption of Mount Vesuvius in 79 AD have found the ancient Romans to have been in surprisingly good dental health.

Lacking sugar cane and sugar beets, they sweetened foods with honey and fructose from fruit.

The rich dined on pheasant and the finest meats, as in the 1877 painting "Das Gastmahl" by Anton von Werner above.

The poor ate millet gruel, beans, vegetables and occasionally a bit of meat or wild game.

Over-indulgence in wine was common, as in the mural below showing a slave assisting an inebriated dining guest.

But in general, they did not need to worry about tooth decay because the only sweets they ate were naturally sweetened with honey or fruit sugar. 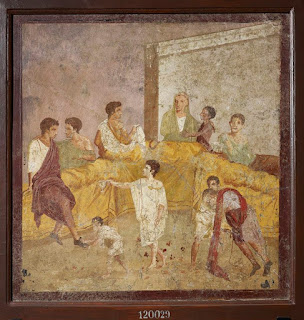 "They had really good teeth ... they ate a diet that contained few sugars, and was high in fruit and vegetables," orthodontist Elisa Vanacore said at a press conference.

What the Pompeiians' ate resembles what is now known as the Mediterranean diet, which has been credited with higher life expectancy in southern Europe.

The team are in the process of performing CAT scans on 86 plaster casts containing the petrified corpses of Pompeii victims.

The almost 2,000-year-old remains are stored in human-shaped plaster casts in order to preserve them and allow them to be moved easily.

"(The process) will reveal much about the victims: their age, sex, what they ate, what diseases they had and what class of society they belonged to. This will be a great step forward in our knowledge of antiquity," said Massimo Osanna, archaeological superintendent of Pompeii.