WILL IT BE A HIT OR A MYTH?
GREEK TOMB SUSPENSE GROWS DAILY 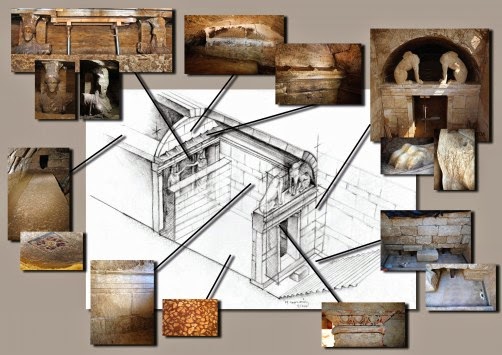 THE hype about the big tomb at Amphipolis in Macedonia Greece is spiraling out of control, with the Greek government now issuing daily updates.

The Greek prime minister is convinced this is the LOST TOMB OF ALEXANDER THE GREAT.

But other experts think it may be the tomb of his mother Olympias or wife Roxane.

However, most serious archaeologists are betting that nothing of interest will be found inside the tomb.

The Greek government has an interesting in keeping up the hype to distract from a crumbling economy and political crises.


Less than a month after the initial discovery, archaeological excavations have brought several findings of unique beauty to the surface, such as two sphinxes that guarded the tomb's entrance and two amazing CARYATIDS with open arms, which also hints that this ancient monument is of unique importance.

Meanwhile, the Greek Culture Ministry has released its first graphic representation of the tomb, as depicted by the Ministry’s architect Michalis Lefantzis.

The drawing shows all the excavation work of archaeologist Katerina Peristeri and her team, and what they have achieved so far.

The stairs at right lead to the tomb's entrance and the Sphinxes, which stand as vigilant guardians of the ancient tomb's "occupant(s)" … if any.

Behind the Sphinxes is the room where the Caryatids were discovered and in which the mosaic floor was revealed.

What lies beyond the Caryatids? The Greek government is hoping to find the fabled rock crystal sarcophagus of Alexander the Great.

In the modern religion of Antinous, Alexander is a SAINT OF ANTINOUS for being an example of the greatness of homosexuality.