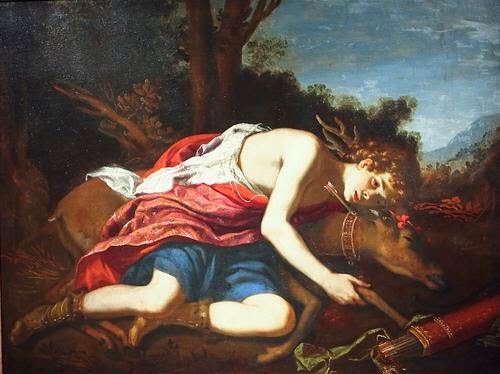 ON the Equinox ... may Antinous-Cyparissus bless us with celestial alignment and let us be in harmony with the cosmos.

We regard the September Equinox (Autumnal in the Northern Hemisphere and Vernal in the Southern Hemisphere) as the SACRED STAG HUNT in which Antinous spiritually pursues the magic stag through the spiritual forest ... the stag representing the male god force within us.

The stag is a symbol for gay spirituality, a graceful, beautiful animal, crowned with horns, mighty and strong, yet pursued by hunters who yearn for the taste of his tender meat.

We look to the story of Cyparissus the beautiful boy who was lover of Apollo or in another version of the forest god Silvanus.

As a gift of love, the god gave Cyparissus a beautiful stag, but while hunting the ever jealous god of the west wind fooled Cyparissus into accidentally shooting and killing his beloved stag. (Image: "Cyparissus" by Jacopo Vignali)

The boy was so consumed by grief that Sylvanus-Apollo took pity and immortalized him by turning him into the Cypress tree, which is an emblem of death.

So it is the the Stag Hunt brings summer to a close and prepares the way for the Death and Transfiguration of Antinous.

We pray to the Horned God to come into our lives and direct our magical forces as gay men towards fulfilling our goals and accomplishing our dreams. We are both hunter and hunted.

Antinous is both the beautiful Cyparissus and his beloved stag, and between the two is a sacred gay mystery.