HOUSE OF AUGUSTUS IS RE-OPENED
ON 2,000th ANNIVERSARY OF HIS DEATH 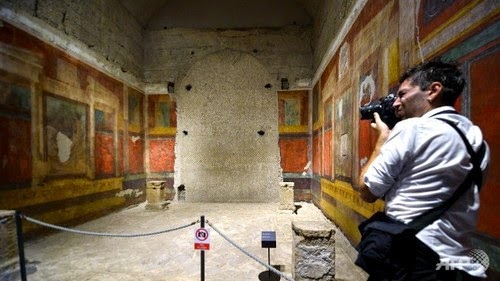 ANTINOUS stood here and saw this room ... lavishly frescoed rooms in the Palatine villa of Emperor Augustus and his wife Livia which are now open to the public for the first time, following years of painstaking restoration.

The rooms in the "Domus Augusti" on Rome's Palatine hill where the emperor lived with his family are re-opening after a €2.5 million (US $3.22 million) restoration to mark the 2,000th anniversary of Augustus's death ... with previously off-limit chambers on show for the first time.

From garlands of flowers on Pompeian red backgrounds to majestic temples and scenes of rural bliss, the rooms are adorned with vividly coloured frescoes, many in an exceptional condition. 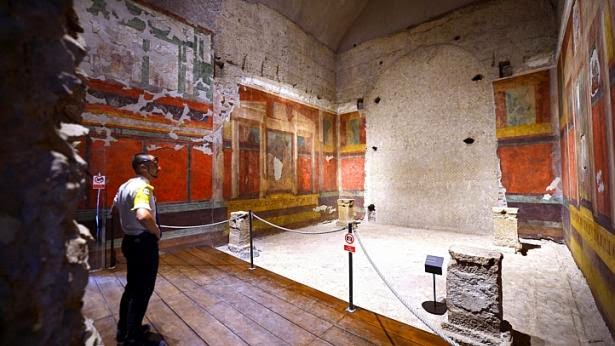 Restorers said their task had been a complex one, with bad weather during excavation threatening the prized relics of a golden era in the Eternal City.

"We had to tackle a host of problems which were all connected, from underground grottos to sewers ... and I'm talking about a sewer system stretching over 35 hectares (86 acres)," Mariarosaria Barbera, Rome's archaeological superintendent, told AFP the French news agency.

To protect the site, tourists will have to book to join one of three daily groups of up to 20 people who will be taken around by a guide for a 15-minute visit.

After being awarded tribunica potestas for life in 23 BC, Octavian decided to buy the house of Quintus Hortensius on the Palatine and make it his primary place of residence.

The comparative modesty of the Domus Augusti was in keeping with the return to traditional ideals promoted during the Augustan period. 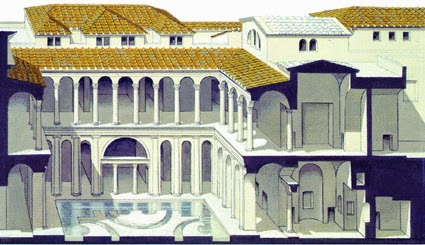 The Domus Augusti was located near the Hut of Romulus and other sacred sites which relate to the foundation of Rome. In antiquity this residence contained two levels, each leading to a garden courtyard.

The founder of the Roman Empire was born Gaius Octavius in 63 BC on the Palatine hill. The great-nephew of Julius Caesar, he was adopted as his son shortly before the latter was assassinated.

Gaius Octavius went on to rule over Rome for 40 years, during which the Republic experienced an era of great wealth and relative peace.

Livia, the love of his life, was his third wife, whom he married when she was pregnant with her first husband's child. He adopted the baby, Tiberius, who would succeed him after his death.

Augustus died aged 75, after which the Senate raised him to the status of a god and appointed Livia his chief priestess. As part of the 2,000 year celebrations, the Palatine Museum has dedicated a room to Augustus with objects connected to his life on show.