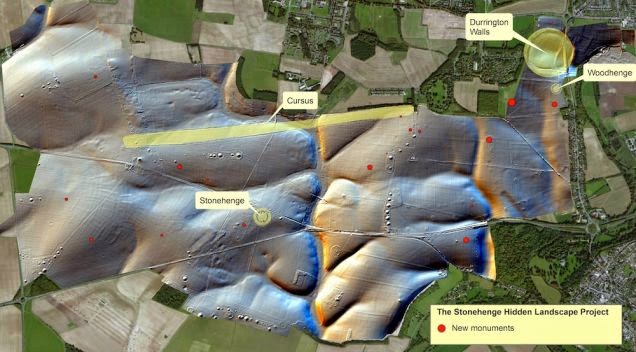 And most remarkable of all ... they have found a massive megalithic monument made up of more than 50 giant stones buried along a 1,082-foot-long c-shaped enclosure, according to a new BBC DOCUMENTARY.

This news is resetting virtually everything we thought we knew about Stonehenge.

Just a week after finding out that Stonehenge was once a complete circle, archaeologists from Birmingham and Bradford universities, and from the Ludwig Boltzman Institute in Vienna, have shattered the image of Stonehenge as a desolate and lonely place.

After four years of painstaking effort, and by using a magnetometer, a ground-penetrating radar (GPR), and a 3-D laser scanner, archaeologists have shown that Stonehenge was once a sprawling complex that extended for miles.

And then there's the previously unknown "super henge," a monument located just two miles from Stonehenge.

Scans suggest that each buried stone is about three meters (10 feet) long and 1.5 meters (5 feet) wide. The stones are positioned horizontally, not vertically, but it's conceivable that they originally stood upright like other standing stones.

The archaeologists suspect they were brought to the site shortly before 2500 BC.

The monuments and structures were not all built at the same time, so the entire complex was not conceived or planned as a whole. Further analysis will reveal exactly how the site evolved through the ages.

The revelations are being made in a two-part BBC Two documentary titled "Operation Stonehenge: What Lies Beneath."