TOM OF FINLAND POSTAGE STAMPS
ARE BEST-SELLING EVER 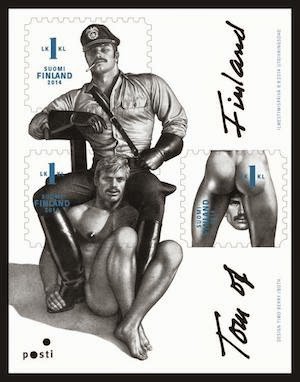 A range of Tom of Finland postage stamps have become the biggest-selling commemorative stamps ever launched in Finland.

The stamps were issued just last week to commemorate the “proud homoeroticism” of the influential gay artist, who is a Saint of Antinous and who inspired the look of Freddie Mercury and the Village People.

The artist, whose real name is Touko Laaksonen, remains an influential figure in gay art.

Tom of Finland's style is so identifiable, so iconic, that it is immediately recognizable ... He is so closely identified with his iconic art that few people ever suspect that his name is not actually Tom, though he is indeed a Finn.

In issuing the stamps, the Finnish postal authority said: “His emphatically masculine homoerotic drawings have attained iconic status in their genre and had an influence on, for instance, pop culture and fashion. In his works, Tom of Finland utilized the self-irony and humor typical of subcultures.

"The drawings on the stamp sheet represent strong and confident male figures typical of their designer," the postal authority said.

After the stamps went on sale on Monday, the service reported that it had received pre-orders from 178 countries, and that the range of stamps were the best selling in Finland’s postal service’s history.

The most orders came from Sweden, the US, the UK and France.

"We haven’t seen this kind of interest before and we probably won't again soon," said Finnish postal official Markku Penttinen.

"Our starting point was to get Touko Laaksonen's artwork in our stamps. We know that he was very well-known globally. Of course the subject matter is also topical and much discussed. This equation has worked better than we anticipated," he continued.