NICANTINOUS AND DEMETRIUS
WRESTLERS AT THE GAMES OF ANTINOUS 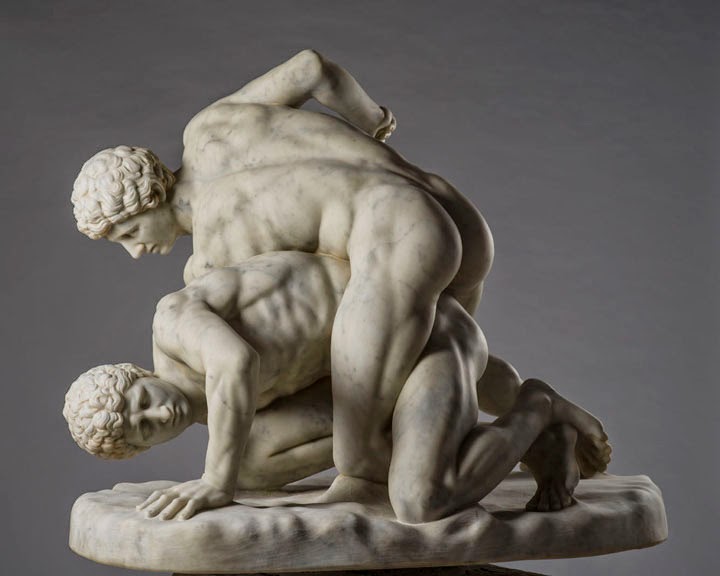 TWO names have surfaced of athletes who took part in the famous Games of Antinous in the mid-3rd Century AD ... two teenage wrestlers named Nicantinous and Demetrius.

The modern priests of Antinous rejoice at the discovery by pure chance of their names ... on a crumbling papyrus which had been found 100 years ago but which only now has been translated.

These two youths were rivals in life. The faced each other in a championship match in honor of Antinous.

And the bittersweet irony of it all is that their names were recorded for posterity because they cheated! They names are bound together for all eternity as if in a vice-like wrestler's grip ... because their managers rigged the match.

The remarkable thing is how few names have survived to this day. We know the names of only a handful of Ancient Priests of Antinous ... and even fewer names of his worshipers.

We know for example that a man called Serapammon commissioned the priests to cast a love spell to win the heart of a woman he adored.

The Games of Antinous, formally called the Great Antinoeia, were held every four years in Antinoopolis which was founded by Emperor Hadrian on the site along the Nile where his beloved Antinous had died in 130 AD. The Games flourished for hundreds of years, but no record had ever been found listing any names connected with the Games. 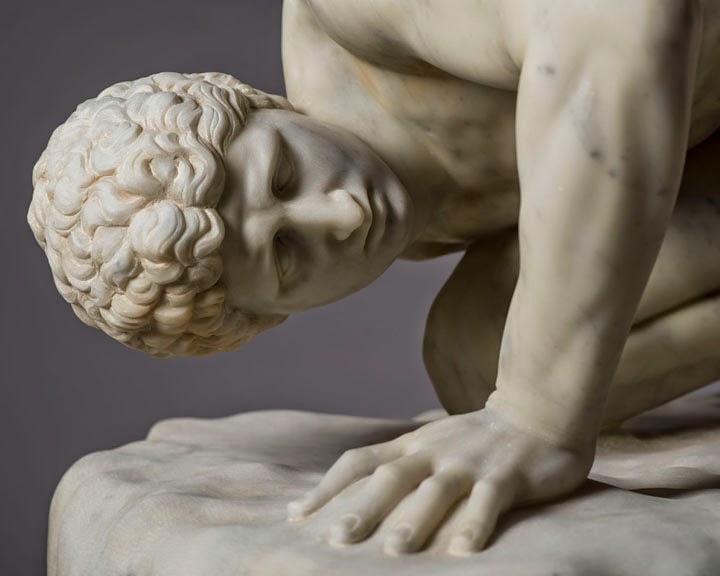 Until now ... and now a papyrus document has been deciphered which lists two boy wrestlers who took part in the final wrestling championship match in at the 138th Great Antinoeia in the year 267 AD.

Ironically, the papyrus is a contract signed by trainers of the two boys to rig their match so that Nicantinous would win ... and Demetrius would be paid off to lose.

Details of this contract came to light this past week as the Modern Priests of Antinous were making plans for the 2014 Games of Antinous which will be held in August.

We shall never know who Nicantinous and Demetrius were during their lifetimes. Now, of course, they will be forever linked together ... grappling to the end of time ... bound together forever in connection with scandal and corruption involving the Games of Antinous. 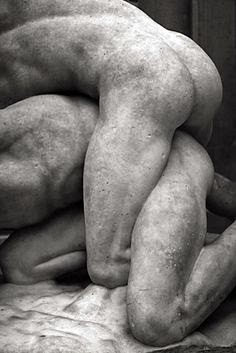 Let us honor both Demetrius and Nicantinous. Presumably Nicantinous won his medals and his prizes and his lifetime pension. But he paid a heavy price.

Apparently, the bribery contract came to light, for it was found filed away at the Great Library in Oxyrhynchos Egypt. Presumably, a court case ensued.

Perhaps both youths were forced to stand trial. And even if their secret never came to light during their lifetimes, they lived with it and faced the threat of blackmail all their lives.

We think there is great Homotheosis in the image of Nicantinous and Demetrius wrestling in an "unfair" match in which the "winner" is the "loser" and the "loser" possibly should have been the "winner".

And we are convinced that this ill-fated wrestling match is a metaphor for the way most gay people "wrestle" with spirituality in a homophobic society. We wrestle against religion.

Let us, as Priests of Antinous, acknowledge both the triumph and the humiliation of both Demetrius (who should have won) and Nicantinous (who unfairly won).

May their names shine as a beacon to all generations of Antinoians … illuminating our way along the narrow path between triumph and folly.

And may we embrace Demetrius in the same spirit of forgiveness and compassion for a youthful transgression …which happened long ago … and which now taints his name for all time.

In the Religion of ANTINOUS THE GAY GOD, we do not wrestle against the divine spirit of gay sexuality ... we become one with it ... HOMOTHEOSIS ... Gay-Man-Godliness-Becoming-The-Same ... Demetrius and Nicantinous are two aspects of a gay person's "struggle" with religion. Both are inseparable ... both are victors ... both are the vanquished ... and in the end they merge into one single spiritual entity ... spiritually inseparable.

Images: The Wrestlers (also known as The Two Wrestlers, The Uffizi Wrestlers or The Pancrastinae) is a Roman marble sculpture after a lost Greek original of the 3rd Century BC It is now in the Uffizi collection in Florence, Italy.