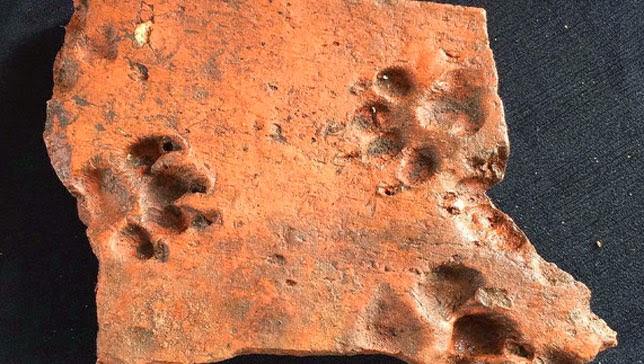 THE paw prints of a puppy, and hoof prints of a sheep or goat were found on 2,000-year-old tiles discovered in a Leicester, England, archaeological excavation.

"They are beautiful finds, as they represent a snapshot, a single moment in history," said archaeologist Nick Daffern. "It is lovely to imagine some irate person chasing a dog or some other animal away from their freshly made tiles."

At least one of the tiles has the imprint of dog paws, and one is marked with a hoof print, likely put on the tile before it hardened.

The original purpose of the tiles … found in layers of rubble used as a hard base for buildings … remains unclear.

The artifacts were found in the city where the long-missing bones of King Richard III were discovered in 2012 under a parking lot.

Leicester was the home base of an Iron age tribe known as the Corieltauvi, and the city remained an important outpost after the Roman conquest of Britain.

Excavators said Roman tweezers, coins, brooches, and painted wall plaster have been uncovered, as well as the traces of a building that was probably robbed of its masonry for later construction projects.