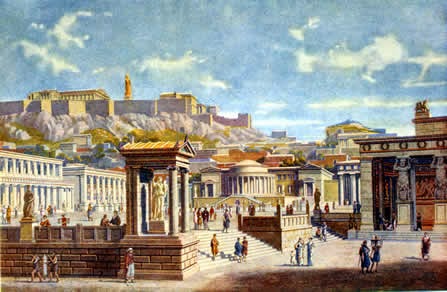 EXPERTS in Bulgaria have unearthed a remarkable Ancient Greek "emporium" market place and hill-top temple compound where the blessings of the Gods were invoked for a nearby gold mine.

The settlement, which appears to be loosely modeled on the Athenian Agora and Acropolis (illustration here), dates back to the 4th and 5th Century BC and was populated by Greek colonists, say the Bulgarian archaeologists.

Under the direction of Associate Professor Dr. Mitko Madzharov of the archaeological museum of Hissarya, the team has been excavating the sites since 2005.

The site is important to archaeologists because it is unusual that a market place and a temple complex would be located in close proximity to each other.

The cult complex consists of a "sanctuary and a temple" that was set atop a hill overlooking the market place … literally ensuring that the Gods watched over the commercial enterprises of this Greek colony.

"The main archaeological finds found in that (temple) area are fragments of tiles of various form and decoration. On some of them were painted spirals, on others - Gorgon Medusa," Madzharov reports.

"The archaeological structures found till now in the area of Sekiz Harman by the village of Krastevieh allow scientists to assume that the cult complex situated at that place was closely connected with the commercial place in the area Pamuk Tepe," Madzharov adds. 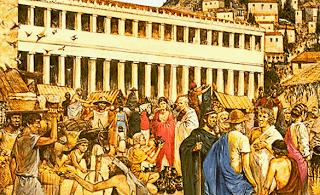 The nearby Greek emporium was located 500 meters southeast of the village and is said to encompass an area of about 10,000 square meters.

Here, they have uncovered architectural and artifact remains that evidence a "significant commercial complex" with intensive trade ties with other Greek settlements in or near the Aegean from the 5th to the 4th Centuries BC.

Not far from the emporium remains they found natural gold deposits and evidence of an ancient road which led to deposits of non-ferrous metals.

He also clarifies the connection between the nearby cult complex and the emporium. "They did not have a status of a town and in them were always built sanctuaries because according to the beliefs of that time Gods were called on as guarantees for the order and respectability of commercial deals."

Madzharov plans to return to the sites with teams in 2014 to further investigate the finds. Individuals interested in additional information about the sites and how to participate may visit the project website.