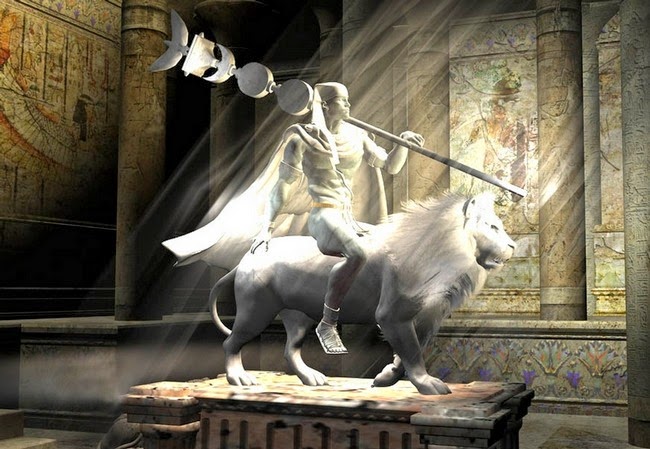 THIS has been one of the biggest archaeological seasons in 90 years in Egypt, and experts believe this could be just the beginning as high-tech advances make the search easier.

One ancient Egyptian burial ground alone could yield treasures that would make Tutankhamun's tomb look like a "display in Woolworths", according to archaeologists.

Such statements always raise hope among Antinophiles, of course, that the fabled "Lost Tomb of Antinous" could be found ... as depicted in this image by British artist ANDREW PRIOR.

It's also claimed that burial treasures from nearby sites in the Valley of the Kings were placed here for safekeeping.
However, the site is in danger and the race is on to save it from tomb raiders using quad bikes and rope ladders, The Sunday Times of London reports.

"Last week, three people were arrested by the army security services at Luxor for entering it," said Romer.

The site has remained intact since 1085 BC. The only person known to have excavated at the site, the Wadi el-Gharbi, is Howard Carter. He discovered Tutankhamun's tomb in 1922.

The site at Wadi el-Gharbi is being scrutinised by Romer and experts in epigraphy. "Herihor is most likely to be buried in a coffin of gold, like Tutankhamun," he said.

"There are likely to be canopic chests, objects of alabaster, gold-plated statues and thrones, though possibly not chariots," explained Romer.

The project is the culmination of 40 years' work for Romer. But he may be beaten to the prize as he needs to secure a permit from Egypt's Supreme Council of Antiquities to continue his search.

It's a race against time as there is a rival expedition already excavating in the area.

"I still hope to explore it but the only important thing in my life now is that it is done properly," Romer says.

Meanwhile, we are still hoping that the Lost Tomb of Antinous is found in our lifetimes.