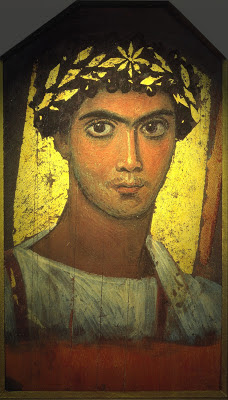 ANTINOOPOLIS is the site of some of the most spectacular portrait art ever found in Egypt.

Art experts have always marveled at the exquisite encaustic (melted wax mixed with paint) portraits which were used as face plates on mummy cases at Antinoopolis and the nearby Fayoum Oasis.

At Antinoopolis, wealthy people even sheathed their mummies in gold leaf, turning their dead loved ones into virtual golden statues, according to FRENCH EXPERTS.

But no one knew how accurate the portraits on those elaborate mummies were.

Now experts using advanced forensic science have proved that the paintings were true-to-life portraits of the deceased when they had been alive.

“We didn’t know what we were going to find,” Brier said.

Brier and colleagues used a CT scanner to produce physical models of the mummies’ skulls. Then a crime artist, who only knew the mummy’s age and gender, used the models to recreate the mummies’ faces. The painstaking process took seven days per mummy.

“We were dying to see what it looked like,” Brier said.

The team then compared the faces to painted portraits entombed with the bandaged bodies.

Two of the four match-ups were strikingly similar.

A mummy from the British Museum was a small woman in her early 20s with delicate features, a narrow face and thick lips. Her face appears to match the features of her portrait. (Image credit: Caroline Wilkinson/University of Dundee Centre for Anatomy & Human Identification)

“It is believed that they were almost certainly painted during the lifetimes of the individuals and clearly were not idealized images,” Brier said of the portraits.

A second mummy from the British Museum was a large man in his 50s with a broad face, thick brow, flat nose, and heavy jaw. His face was very similar to his portrait, which may have been painted when he was younger. (Image credit: Caroline Wilkinson/University of Dundee Centre for Anatomy & Human Identification)

But one face didn’t match the portrait at all, leading the researchers to believe the ancient embalmers might have wrapped the mummy with the wrong portrait.

A mummy from the Glyptotek Museum in Copenhagen was a young man in his 30s with a wide nose, broad cheekbones, thick lips and rounded jawline.  This face looked quite different from the portrait, hinting that a switch might have occurred. (Image credit: Caroline Wilkinson/University of Dundee Centre for Anatomy & Human Identification)

“It is possible that during the mummification procedure, when several bodies were being mummified at the same time, a mismatch occurred,” Brier said.

The fourth mummy’s nose looked more refined in the portrait than in the researchers’ prediction, but his “other facial features and proportions were so consistent between the reconstruction and portrait that no mix-up was indicated here,” Brier said.

A mummy from the Metropolitan Museum of Art in New York City was a man in his early 30s with a wide nose, square jaw and thick lips. His "touched up" portrait appears to show a younger man with a more narrow nose but similar lips and jaw. (Image credit: Caroline Wilkinson/University of Dundee Centre for Anatomy & Human Identification)

The study sheds light on the purpose of the portraits, which represented a shift from symbolic art to realistic art after the Romans conquered Egypt in 30 B.C.

Brier would like to extend the study to include more mummies. But  while there are more than 1,000 mummy portraits, less than 100 are still attached to the people they depict, he said.

“The difficulty is finding portraits that are still bound to the mummy,” he said. “Many portraits were taken off the mummies and sold during the 19th century and early part of the 20th century.”