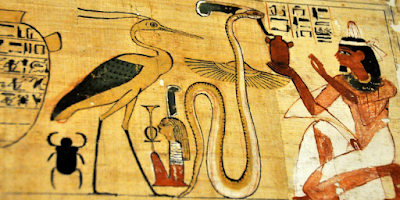 WE all know that the Ancient Egyptians believed you can take it with you ... that death does not mean you have to part with everything that was important to you in life ... but few people today understand that there was a far more sophisticated spiritual interpretation.

Yes, of course, the simple folk believed that you literally took things with you to the afterlife ... mummified body, ushabti figures, food, clothing. There was a huge industry specializing in tomb furnishings,  mummification and supplying the dead with sustenance.

But the material goods in tombs were only symbolic of a far richer, and spiritually deeper understanding of "taking it with you" after death.

The curious-looking winged snake on the papyrus of the 19th Dynasty scribe Amenemwija in Berlin's Egyptian Museum hints at that far deeper spiritual meaning.

The deity is called "Nehebkau" (Harnesses KAs) ... and he is poised in front of the deceased ... taking in the every spiritual essence (KA) that the deceased wants to take with him in the afterlife.

November 29th was one of this deity's feast days.

The Egyptians believed you give up only those things you don't want to take with you ... you take anything and everything else which you deem worth saving for eternity.

Nehebkau represents an advanced spiritual element. In computer parlance, he "downloads" the spiritual essence or "KA" of everything you want to have with you ... and Nehebkau defrags and condenses everything for instant retrieval.

The "KA" is the spiritual essence of everything. Each human has a main KA plus many subsidiary ones. Everything has at least one KA ... every blade of grass, every object, every animal ... everything.

Nehebkau literally takes all the KAs of the person and all the KAs that the person wants to have with him/herself in the afterlife ... all friends, memories, pets, pleasant experiences, houses, furnishings ... the spiritual essence of EVERYTHING ... and then he "downloads" them by swallowing them into his slender serpentine body ... and condenses them like zip files and defrags them and compacts and configures them all into an infinitely small corner of his infinitely vast mind ....

It is important to point out that this does not mean that the dead person drains the life force from all friends and family and leaves them empty. It does not mean they all have to die to accompany the deceased.

Instead, it is exactly like "downloading" the essence of the persons or objects. The persons and objects themselves remain intact ... their spiritual essence is unaffected ... but Nehebkau has downloaded the spiritual essence to accompany the deceased. 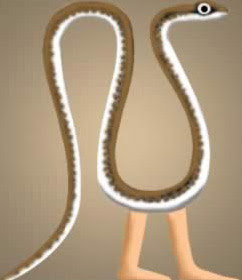 Nothing is diminished. Nothing is lost. The KA is copied and saved and filed away.

And in the afterlife, the deceased retrieves any and all docs, jpegs, YouTube URLS and files ... eternally fresh and alive ... for all eternity.

We tend to buy the Judaeo-Christian idea of ashes-to-ashes, dust-to-dust which means that we must "let go" while our loved ones, memories and treasures all crumble away and end up on the conveyor belt of the garbage incinerator ... like the final scene from a "Toy Story" movie.

Or we opt for the Eastern idea that you become one with the universe and everything dissolves away into one-ness ... no self, no ego, no death, no suffering, no end to suffering, no end to death ... etc. ... like the final scene of a movie about Tibetan monks and a little boy from Seattle.

These scenarios would have been appalling to the Egyptians. You take whatever and whomever you want along with you into the afterlife ... no carry-on bags necessary ... everything is neatly defragged and compressed and configurated and stored away in the infinitely vast mind of Nehebkau.

Yes, all of your earthly friends, pets and possessions will crumble away ... but their spiritual essence has been downloaded as a back up for you to keep with you ... for all eternity ... thanks to Nehebkau.