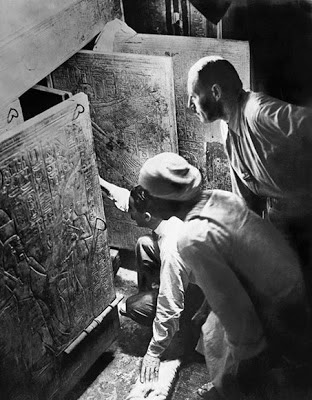 IT was one of the greatest archaeological discoveries of the 20th century - perhaps of all time.

One hundred years ago this month, British Egyptologists Howard Carter and Lord Carnarvon discovered the tomb of the boy king, Tutankhamun, in Egypt's Valley of the Kings - which had lain undisturbed for more than 3000 years.

Inside the remarkably well-preserved tomb was an abundance of gold and fineries left with the 19-year-old after his death and mummification.

Carnarvon's great grandson - the current Lord Carnarvon - was among those attending a celebration event at Carter's old house in Luxor, now a museum.

"When my great-grandfather and Howard Carter actually broke through the outer sealed door with Tutankhamun's cartouche and crest on it and when they first saw into the ante-chamber of the tomb. This amazing archaeological discovery that has never been surpassed.''

Carnarvon is a big fan of his great-grandfather but readily admits his wife Fiona is more of an expert on Egyptology than he is, even translating a certain amount of hieroglyphics. He says opening the tomb was a very dramatic moment.

"My great-grandfather says to Howard Carter 'What do you see?' and Carter famously replies 'Just wonderful things.' And he's looking back at this, in a way perhaps, theatre set of ancient civilization 3,100 years ago, everywhere the glint of gold off those beautiful wooden objects and that's just the start," said Carnarvon.

Egyptian authorities also marked the anniversary by reopening the tomb of Merinbetah - previously closed for six years of restoration.

Tourism chief Hisham Zaazou said the government was determined to support more events to boost tourism, which has declined sharply since the revolution.

''We will continue to have an agenda, a touristic agenda, throughout the coming weeks and months for these parts to help boost the interest and the demand once again to.''

Despite the Tutankhamun anniversary and it being peak season, Luxor, traditionally a prime tourist hub, is currently only at about 27 percent of its tourist capacity.