MYSTERY OF THE MUMMIFIED MEMBER
DID TUTANKHAMUN HAVE AN ERECTION?

EXACTLY 100 years ago, Howard Carter discovered the lost tomb of Tutankhamun. And for decades the mummified penis of Tutankhamun has been shrouded in mystery ... especially when it mysteriously "vanished" for a number of decades ... only to be found amongst the dust and detritus between his legs at the bottom of the sarcophagus a few years ago.

But a prominent Egyptologist says the embalmers engorged the royal penis so that it was erect ... and it originally stood at a 90 degree angle upwards from his body ... to enhance his identification with Osiris.

This would contradict Howard Carter's famous first photo of the mummy, which shows the penis pointing towards his toes. However, it is well known that the mummy had been badly damaged by Carter in the process of unwrapping the ancient bandages.

The head had to be severed from the body because the back of the skull was "glued" by perfumed resins to the bottom of the mummy case. The wrists were broken in order to remove bracelets.

But somehow the royal penis and testes miraculously survived this rather rude unwrapping process and were clearly visible in those initial photos ... the first royal photographic portrait of the king.

The portrait was one of nearly 2,000 images taken by Carter's photographer, Harry Burton, as part of a photographic record of each step of Carter's meticulous procedural methods ... setting new standards for archaeological research.

As you can see in the photo, the penis is clearly visible. In fact, by mummy standards, King Tut is really quite well endowed. The mummification process results in dramatic shriveling of soft tissues, of course, reducing even the most prodigious penis to about the size of a sun-dried sultana raisin.

Somehow, in Tut's case, the embalmers managed to retain at least a semblance of respectable manhood.

Did the embalmers pump it full of padding material that would resist shrinking, like some after-world sausage-makers? No one knows how they achieved that. It is one of the puzzles of archeology, the subject of dissertations.

Now, Egyptologist Salima Ikram, a professor at the American University in Cairo, says it is in fact supposed to represent an erect penis ... and it was originally positioned at right angles to the body ... pointing towards the heavens.

The mummified erect penis and other burial anomalies were not accidents during embalming, Ikram suggests, but rather deliberate attempts to make the king appear as Osiris, the god of the underworld, in as literal a way as possible.

The erect penis evokes Osiris' regenerative powers. Egyptians believed Osiris was killed and dismembered by his brother Seth. Isis found all the scattered pieces ... except for his phallus, which had been swallowed by the phallic-shaped Oxyrhynchus fish.

Isis fashioned a magical phallus by which she, in the guise of a bird, was impregnated by Osiris. Their child was Horus the falcon sun god.

Another anomaly is the absence of a heart. No heart was found in the canopic jars, and no heart scarab was found in Tutankhamun's ribcage. Ikram says the lost heart recalls the story of the god being cut to pieces by his brother Seth and his heart buried.

Making the king appear as Osiris may have helped to undo a religious revolution brought about by Akhenaten, a pharaoh widely believed to be Tutankhamun's father, Ikram says.

Akhenaten had tried to focus Egyptian religion around the worship of the Aten, the sun disc, going so far as to destroy images of other gods. Tutankhamun was trying to undo these changes and return Egypt back to its traditional religion with its mix of gods.

Ikram cautions that her idea is speculative, but, if correct, it would help explain some of the mysteries surrounding Tutankhamun's mummification and burial. 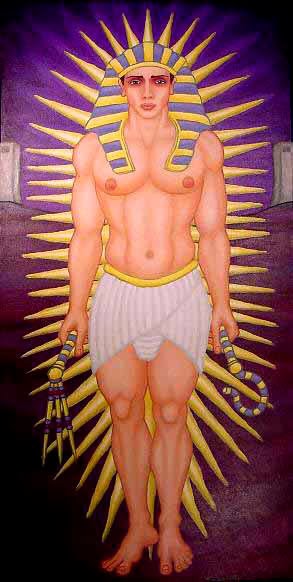 Mystery after mystery surrounds the mummy.

There was a great outcry in dusty Egyptological circles when the mummy was unwrapped in 1968 in order to be X-rayed, and British researchers discovered not only that the arms and legs had been broken off but also that one ear was missing ... and that the royal penis was gone.

It was obvious that something had happened to the mummy after the portrait photo was taken. Had it been dropped?

For the past four decades, speculation has been rife as to the fate of the mummified member.

It was generally assumed that Carter or else his benefactor, Lord Carnarvon, had swiped the penis immediately after Burton snapped the photograph.

It was whispered that Carter or Carnarvon may have kept the penis as a kind of gruesome souvenir. Those rumors were spurred by reports that Carnarvon had, in fact, spirited away a few objects from the tomb which were found in his manor house many years after his death ... the same manor house which is the setting for the TV series "Downton Abbey."

But it seemed very out of character for Carter to have done such a thing, or for him to have condoned such a theft by Carnarvon. Carter was incredibly meticulous, spending years cataloging and safe-guarding every last item in the tomb, every shred of fabric, every last bead from long-disentegrated necklaces. 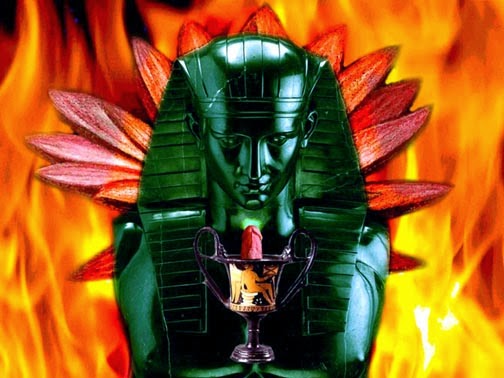 It seemed unthinkable that Carter, a consummate scientist, would have copped the king's cock.

So it was very gratifying when, in 2006, it was announced that the penis had been found ... it had only dropped off and become lost amidst the other debris of the royal groin so that nobody had noticed it.

And what has all of this to do with Antinous? Well, his tomb and his body have yet to be found. Carter's methodology and ethics will doubtless serve as a model.

And Ikram's latest findings could spur speculation about the sacred-sexual state of the remains of Antinous ... who was also identified with Osiris.