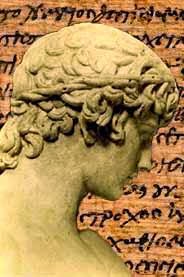 UNTIL now, the Obelisk of Antinous was the only sacred text from the ancient religion of Antinous.
But now, experts have discovered three scraps of papyrus from the area near Antinoopolis which are authentic ancient texts describing Antinous.
Italy's Istituto Papirologico Vitelli announced this week that "a truly exceptional hieratic text" which comes from the famous library cache of Tebtunis near Antinoopolis is an Osiris ritual related to the religion of Antinous. It dates to the 1st and 2nd Centuries, during the heyday of the religion of Antinous.
In an as yet unpublished paper, still unpublished, Andrea Kucharek of Heidelberg University mentions Emperor Hadrian and Antinous himself.
The first reads "Wsi -r- Nelndi Neln[ws]" (Wsir-Andinws) ... or Osiris-Antinous. In this papyrus, Hadrian himself celebrates the Egyptian rites that will allow the young man to identify with the ruler of the afterlife, and to awaken to the new life. 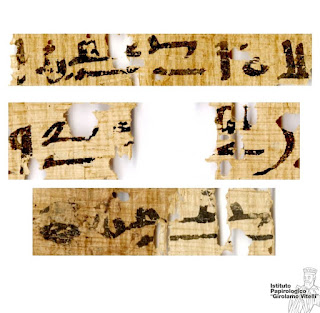 The second fragment preserves part of the cartouche with the name of Emperor Hadrian, "Hdri ini inns" (Hdriians): unusually with an initial "h" at the beginning which is quite rare in hieratiic documents, and appears only in documents related to the religion of Antinous ... and on the obelisk.
In the third fragment, the name Antinous is written "Andin", with a subsequent determinative for cities. That means the word is the name of Antinoopolis in Egyptian writing.
Sadly, the paper was burnt just at the end of the papyrus roll, depriving us of accurate handwriting!
These astounding documents are in this preliminary report: A. Cook, Papyrus PSI inv. I 130: a new Egyptian source on the cult of Antinoos, GM 257 (2019). Bust of Osiri-Antinoo: Louvre (Ma433), from Villa Adriana.
Posted by Hernestus at 12:00 AM