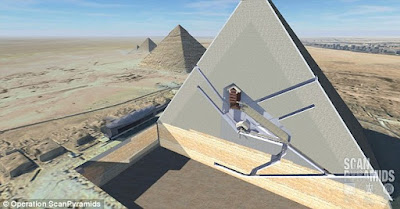 Experts confirmed the existence of the mysterious cavities after scanning the millennia-old monument with radiography equipment.

It follows an announcement by the antiquities ministry last week that "two anomalies" were found in the pyramid built 4,500 years ago under King Khufu.

They said they were conducting further tests to determine their function, nature and size. 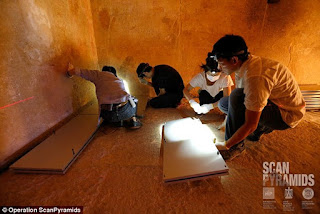 At 146 metres (480 feet) tall, the Great Pyramid of Giza, also known as the Pyramid of Khufu, named after the son of Pharaoh Snefru, is considered one of the seven wonders of the ancient world.

It has three known chambers, and like other pyramids in Egypt was intended as a pharaoh's tomb.

"We are now able to confirm the existence of a 'void' hidden behind the north face, that could have the form of at least one corridor going inside the Great Pyramid," scientists from Operation ScanPyramids said in a statement. 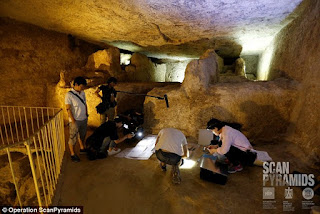 Another "cavity" was discovered on the pyramid's northeast flank, said the researchers.

They are using radiography and 3D reconstruction for their study.

"Such void is shaped like a corridor and could go up inside the pyramid," Mehdi Tayoubi, founder of the Paris-based Heritage Innovation Preservation Institute, told Seeker.

He said that currently no link can be made between the two cavities.

Operation ScanPyramids began in October last year to search for hidden rooms inside Khufu and its neighbour Khafre in Giza, as well as the Bent and Red pyramids in Dahshur, all south of Cairo.

The project applies a mix of infrared thermography, muon radiography imaging and 3D reconstruction ... all of which the researchers say are non-invasive and non-destructive techniques.