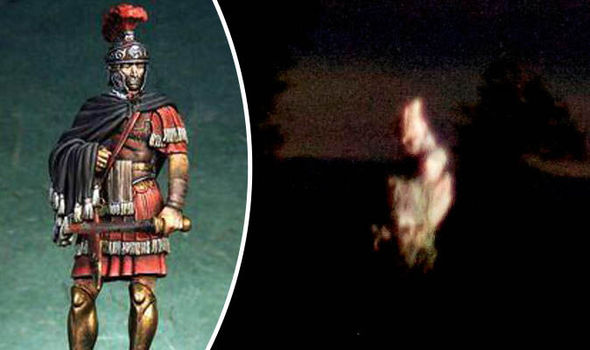 Amateur photographer Stuart Murray was out with friends at night trying to get pictures of the Northern Lights by the Unesco World Heritage Site when this spooky apparition appeared on camera.

The 26-year-old security engineer said: "We had set out because the live data was looking good for a display of the Northern Lights, the stats were good but when we got there it was cloudy.

"On a good night that area near the wall is very good getting shots of the lights," he told the SUNDAY EXPRESS.

"Me and friends were just chatting taking some test shots and then this figure just appeared on camera."

Stuart said he and his pals initially thought it was a sheep or something which had wondered into the frame but when they ran over there was nothing there.

He added: "It was not in any of the other shots, just this one, when we realised there was nothing there which could have popped up like that we got really excited and people started to say it was the ghost of an old Roman soldier.

"I have heard stories about a Roman soldier who has been spotted patrolling the wall, maybe the stories are true ... who knows."

Hadrian's Wall was a defensive fortification in the Roman province of Britannia, begun in 122 AD in the reign of the Emperor Hadrian.

It ran from the banks of the River Tyne near the North Sea to the Solway Firth on the Irish Sea, and was the northern limit of the Roman Empire.