GREEKS MAY HAVE HELPED CHINESE
CREATE THE FAMED TERRACOTTA ARMY 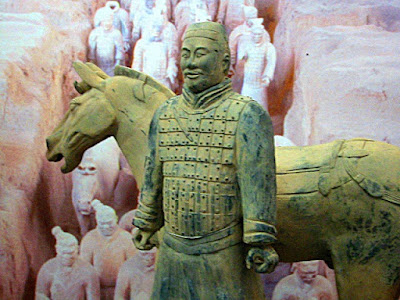 WESTERN explorers settled in China more than 1,500 years earlier than experts had believed, new research has revealed, after archaeologists found the famous Terracotta Warriors could have been made with the help of the Greeks.

This blog first reported in 2013 that the 8,000 statues, which guard the mausoleum of the First Emperor were likely to have been made under the guidance of a European sculptor who worked with locals at the site and took influence from Ancient Greece.

Now, in a report to be broadcast in the US and Britain this weekend, experts say that an extensive study of sites in Xinjiang Province, China, has revealed European-specific mitochondrial DNA, suggesting Westerners travelled, settled and died there before and during the time of the First Emperor: 1,500 years earlier than currently accepted.

The discoveries have been hailed as "more important than anything in the last 40 years" surpassing even the discovery of the Terracotta Army itself in significance. They are thought to be the first documented contact between Western and Chinese civilizations ever recorded.

They came about during excavations across the site by Mausoleum archaeologists, which have now been documented for television by the National Geographic Channel and BBC.

Key findings include evidence that treasures in the tomb of the First Emperor were created with the help of the West, with inspiration from the statues of Ancient Greece.

The tomb complex itself was found to be "much bigger than first thought" ... at 38 square miles, 200 times bigger than Egypt's Valley of the Kings ... with two roads out of it identified with drone technology.

Experts are particularly excited by the discovery of DNA suggesting Westerners lived in the area during the time of Qin Shi Huang, from 259 to 210 BC.

Dr Li Xiuzhen, Senior Archaeologist at the Emperor Qin Shihuang's Mausoleum Site Museum, said: "We now have evidence that close contact existed between the First Emperor’s China and the West before the formal opening of the Silk Road. This is far earlier than we formerly thought."

Evidence of that contact, experts believe, can be found in the style of the Terracotta Warriors, with "no tradition of building life-sized human statues" identified in China before then.

Professor Lukas Nickel, chair of Asian Art History at the University of Vienna, believes the tomb of the First Emperor was influenced by the arrival of Greek statues in Central Asia in the century following Alexander the Great.

"I imagine that a Greek sculptor may have been at the site to train the locals," he said.

The full findings will be broadcast on the National Geographic Channel in the US, and one BBC Two this Sunday.